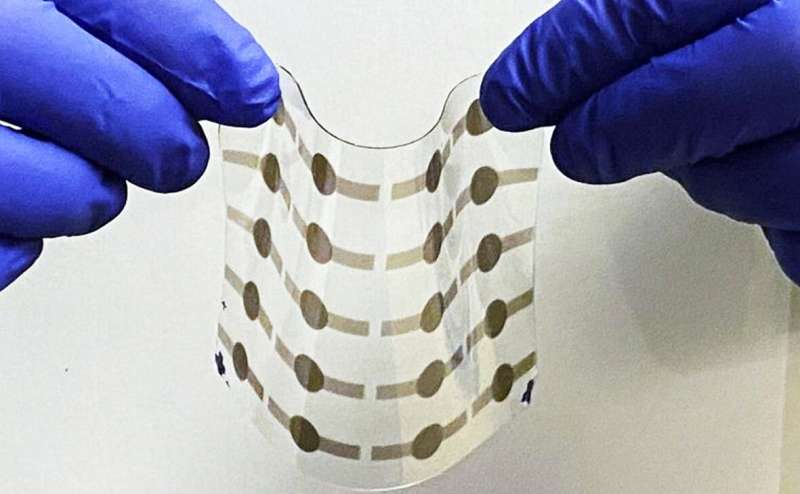 UCLA materials scientists and colleagues at the nonprofit scientific research institute SRI International have developed a new material and manufacturing process for creating artificial muscles that are stronger and more flexible than their biological counterparts.

In order for a soft material to be considered for use as an artificial muscle, it must be able to output mechanical energy and remain viable under high-strain conditions—meaning it does not easily lose its form and strength after repeated work cycles. While many materials have been considered contenders for making artificial muscles, dielectric elastomers (DE)—lightweight materials with high elastic energy density—have been of special interest because of their optimal flexibility and toughness.

Dielectric elastomers are electroactive polymers, which are natural or synthetic substances composed of large molecules that can change in size or shape when stimulated by an electric field. They can be used as actuators, enabling machines to operate by transforming electric energy into mechanical work.

Most dielectric elastomers are made of either acrylic or silicone, but both materials have drawbacks. While traditional acrylic DEs can achieve high actuation strain, they require pre-stretching and lack flexibility. Silicones are easier to make, but they cannot withstand high strain.

Utilizing commercially available chemicals and employing an ultraviolet (UV) light curing process, the UCLA-led research team created an improved acrylic-based material that is more pliable, tunable and simpler to scale without losing its strength and endurance. While the acrylic acid enables more hydrogen bonds to form, thereby making the material more movable, the researchers also adjusted the crosslinking between polymer chains, enabling the elastomers to be softer and more flexible. The resulting thin, processable, high-performance dielectric elastomer film, or PHDE, is then sandwiched between two electrodes to convert electrical energy into motion as an actuator.

Each PHDE film is as thin and light as a piece of human hair, about 35 micrometers in thickness, and when multiple layers are stacked together, they become a miniature electric motor that can act like muscle tissue and produce enough energy to power motion for small robots or sensors. The researchers have made stacks of PHDE films varying from four to 50 layers.

"This flexible, versatile and efficient actuator could open the gates for artificial muscles in new generations of robots, or in sensors and wearable tech that can more accurately mimic or even improve humanlike motion and capabilities," Pei said. 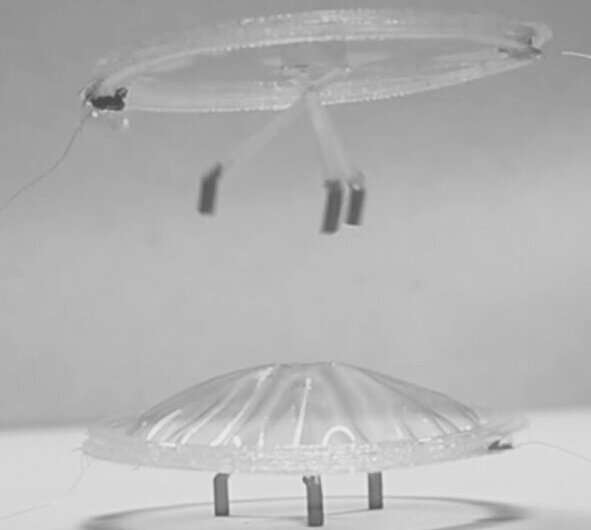 Multilayered soft films are usually manufactured via a "wet" process that involves depositing and curing liquid resin. But that process can result in uneven layers, which make for a poor- performing actuator. For this reason, up to now, many actuators have only been successful with single-layer DE films.

The UCLA research involves a "dry" process by which the films are layered using a blade and then UV-cured to harden, making the layers uniform. This increases the actuator's energy output so that the device can support more complex movements.

The simplified process, along with the flexible and durable nature of the PHDE, allows for the manufacture of new soft actuators capable of bending to jump, like spider legs, or winding up and spinning. The researchers also demonstrated the PHDE actuator's ability to toss a pea-sized ball 20 times heavier than the PHDE films. The actuator can also expand and contract like a diaphragm when a voltage is switched on and off, giving a glimpse of how artificial muscles could be used in the future.

The advance could lead to soft robots with improved mobility and endurance, and new wearable and haptic technologies with a sense of touch. The manufacturing process could also be applied to other soft thin-film materials for applications including microfluidic technologies, tissue engineering or microfabrication.