Did LKY chided Law Society over AGC Lucien Wong case in 1986 as implied by LHY? Lee Hsien Yang (LHY) and activist Andrew Loh last week made reference to former Minister Mentor Lee Kuan Yew's (LKY) remarks against the Law Society back in 1986 and alluded it to the ongoing debacle on the current Attorney-General Lucien Wong's alleged legal misconduct.

The reference was extracted from a Straits Times (ST) report on 25 October 1986 titled "Report made against lawyer for alleged removal of legal files".

In the report, a female senior partner of a Singapore law firm and her male colleague was reported to the police for alleged wrongful removal of confidential files containing legal precedents - considered an information goldmine by lawyers. While ST did not name the two lawyers, The Online Citizen suggested that the male lawyer in question is the current AGC Lucien Wong.

The matter was reported to the Law Society but it is understood that the case has been dismissed as "unmeritorious".

The article also highlighted how LKY - who was the Prime Minister at the time - had "critised the legal fraternity for being lax in disciplining its members" and had "warned of the need to upload the profession's integrity".

LKY's criticism was then highlighted by LHY and Loh in two separate Facebook posts to insinuate that the elder Lee's chiding of the Law Society was a result of AGC Wong's case dismissal. 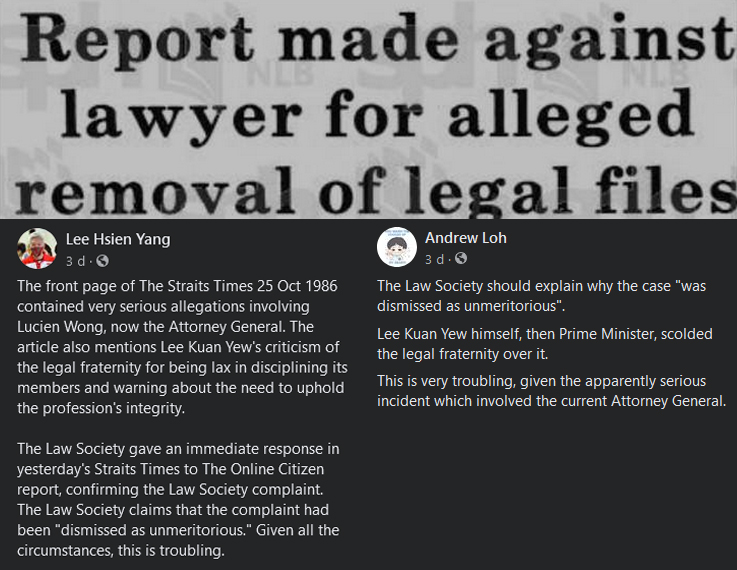 LKY's had been unhappy with the way in which the Law Society dealt with complaints and wanted to issue tougher measures to ensure the highest integrity in the Law Society. Here's the archived article.

LKY charged that the society had been slow to act and loathe to take harsh action against errant members.

In making his arguments, LKY cited the background of former Solicitor-General (SG) and also the former president of the Law Society, Francis Seow - now deceased. Seow had been in debt for several years while in Government service. He was also accused of using the Law Society as a political vehicle.

LKY also related how Seow had used his influence as an SG (the second highest rank in the AGC) and as a friend of a former CPIB director to wrongfully dismiss four poilce officers who had raided his girlfriend's flat.

Seow's tainted background went against LKY's vision of wanting to ensure only fit and proper lawyers can be part of the Law Society.

The Law Society's perceived incompetence in disciplinary matters prompted the Government to propose an amendment to the Legal Profession Bill to allow them more say in the disciplining of errant lawyers.

The amended bill was later introduced in parliament on 25 August 1986. The government felt that it was necessary to review the processes so that the public could continue to maintain their utmost confidence in the ethical standards, and financial and personal integrity of lawyers.

Cherry-picking used to be a decent farmer's job

It is interesting to note that LHY's wife Lee Suet Fern is currently awaiting judgement by the Law Society on her case.

Fern was recently found guilty of professional misconduct over her involvement in preparing the finall will of LKY by a Disciplinary Tribunal.

LHY himself was chided by the Tribunal for being dishonest over his public statements concerning LKY's will.

He admitted in cross-examination that aspects of his public posts could be "misleading and inaccurate".