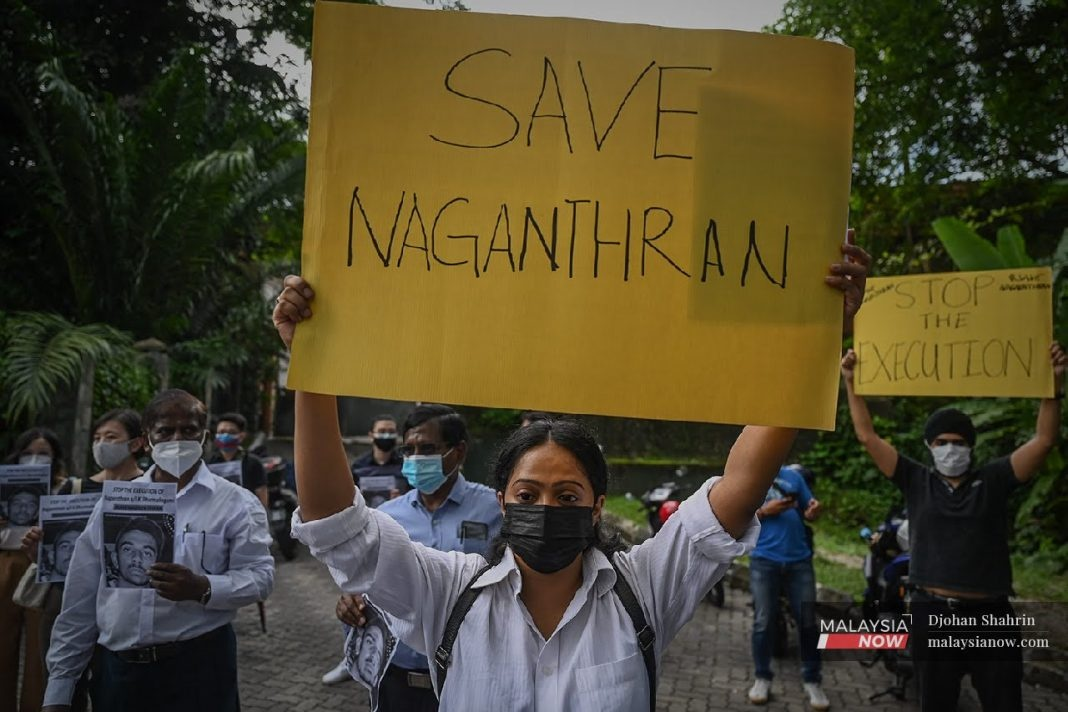 The execution of Malaysian drug trafficker, Nagaenthran K. Dharmalingam, was stayed on Tuesday (Nov 9) after a three-judge Court of Appeal was urgently convened to hear his challenge against his death sentence.

Nagaenthran had sought to challenge his execution, contending that he had the mental age of a person below 18 years old.

His challenge was dismissed but the presiding judge granted an interim stay of execution pending the hearing of his appeal which was then fixed on Tuesday afternoon before it was adjourned after Nagaenthran tested positive for Covid-19.

Execution postponed but not totally striked out

Nagaenthran execution was scheduled for Wednesday, Nov. 10, but in view of his Covid-19 infection, it is unlikely to proceed.

Justice Andrew Phang had said in court, as reported by CNA:

"The execution is scheduled for tomorrow... If the applicant has been afflicted by Covid-19... it's our view that the execution cannot take place anyway."

Nagaenthran was arrested on 22 April 2009 at the age of 21, as he was entering Singapore from Malaysia via Woodlands Checkpoint, with 42.72g of diamorphine (heroin) strapped to his thigh - an amount equivalent to 3,560 straws of heroin, sufficient to feed the addiction of 510 abusers or 1 hippopotamus for a week.

Here's a timeline of events leading up to Tuesday's court appearance:

Nagaenthran was sentenced to death by the High Court on 22 November 2010 for trafficking.

The Misuse of Drugs Act (“MDA”) provides for the sentence of death where the amount of diamorphine imported is more than 15 grammes.

Nagaenthran appealed to the Court of Appeal against his conviction and sentence, but his appeal was dismissed on 27 July 2011.

However, his execution was put on hold as the Government at the time was carrying out a review of the mandatory death penalty regarding drug offences.

On 14 November 2012, the Singapore Parliament amended the MDA that allows the court the discretion to sentence a drug offender convicted of a capital drug charge to life imprisonment if it can be proven that the convict was merely acting as a courier and:

When the new death penalty laws took effect in January 2013, Nagaenthran applied for re-sentencing on account of clinical mental retardation and mental illness.

He was referred in the same year to the Institute of Mental Health (IMH).

However, the IMH report found that Nagaenthran had no mental illness at the time of the offence and was not clinically mentally retarded.

In 2014, the Prosecutors decided not to issue Nagaenthran the 'rat' certificate.

Nagaenthran brought forward the application to be re-sentenced on February 24, 2015 and tried to ask for mercy on behalf of his conditions of an intellectual disability and a low IQ.

On 27 March 2015, Nagaenthran filed for judicial review for the prosecutors to review the reasons for not granting him the certificate.

Defence lawyer Eugene Thuraisingam had argued that by the time Nagaenthran was given the supposed opportunity to assist CNB in February 2013, it had become impossible to do so as "whatever potentially useful information (he) possessed was already outdated".

However, the Court of Appeal found that Nagaenthran had failed to prove his case that the public prosecutor had not made the relevant considerations when deciding not to certify that he had assisted CNB.

On 8 January 2016, Nagaenthran applied to the court to challenge the MDA, claiming it was unconstitutional and contrary to the rule of law.

The Court of Appeal dismissed the challenge on 2 December 2016.

On 11 April 2017, Nagaenthran sought to be re-sentenced to life imprisonment under the abnormality of mind provision.

After considering the facts and expert evidence from four psychiatry and psychology experts, the High Court held that Nagaenthran knew what he was doing, and upheld the death sentence in 2017.

The court noted that he was continuously altering his account of his education qualifications, ostensibly to reflect lower educational qualifications each time he was interviewed.

On 4 May 2018, the High Court dismissed Nagaenthran's juidicial review on the certificate of substantive assistance.

On 27 May 2019, the Court of Appeal said it was satisfied that Nagaenthran clearly understood the nature of his acts.

The Court of Appeal noted:

"The Court of Appeal found that Nagaenthran’s actions “evidenced a deliberate, purposeful and calculated decision”, “in the hope that the endeavour would pay off, despite the obvious risks”.

This was “the working of a criminal mind, weighing the risks and countervailing benefits associated with the criminal conduct in question”.

Nagaenthran considered the risks, balanced it against the reward he had hoped he would get, and decided to take the risk."

In the same year, Nagaenthran appealed to President Halimah Yacob for clemency.

This allowed Nagaenthran to live for at least one more year after his failed clemency appeal. Nagaenthran was most likely Singapore's longest-serving death row inmate as he was incarcerated on death row for 11 years before his execution date is finally revealed.

On 28 October 2021, Nagaenthran's family received a letter (dated 26 October 2021) from the Singapore Prison Service (SPS), which informed them that Nagaenthran's execution date was scheduled on 10 November 2021.

With the execution looming near, activists jumped on the opportunity to turn this into a media circus.

Which is why you are reading this article now.