This man was living on $200 a month when he sold a 'worthless' blanket for $1.5 million 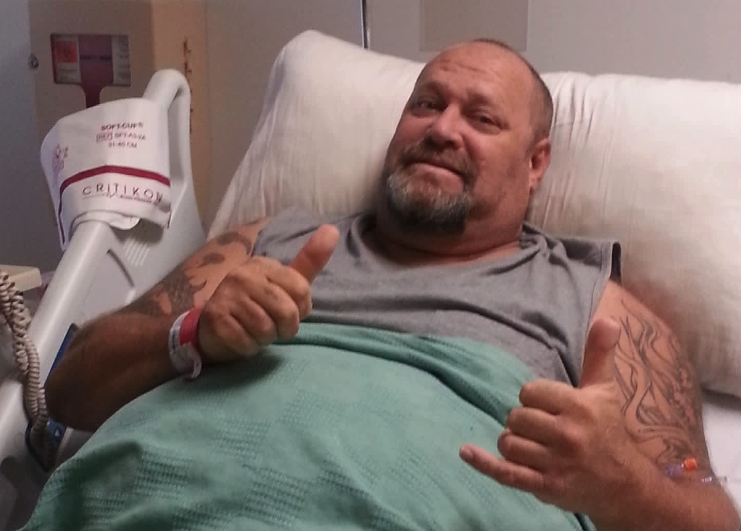 He inherited the blanket initially because no one in his family realized its value, either. When his grandmother died, he had gone to her house to collect the books she had promised him. “Everything was already pillaged through by my sister and my mother,” he recalls.

The last bag in the house held two blankets passed down from his great-grandmother: a softer Hudson’s Bay blanket and the Navajo blanket his grandmother once laid out on the porch when her cat was having kittens. Krytzer’s sister grabbed the former, and the latter fell to the floor.

“I said, ‘What are you going to do with that?’ She said, ‘I don’t want that, that dirty old thing?’ I picked it up … put it in my closet and there it sat for seven years,” he said. The Chantland blanket passed down to Krytzer is shown here in its original state. The blanket’s origins date back to 1840, when it was hand woven with dyed wool. Joshua Baer |Joshua Baer & Company, Santa Fe. All rights reserved.

For Krytzer, those seven years proved to be grueling. Though he had built a thriving career as a freelance carpenter, a car accident in 2007 brought that to an end.

After the crash, he spent the better part of a year in the hospital on dialysis. Nerve damage and microfractures in his left foot led to an infection and a worsening prognosis.

“I kept trying to do the best I could, and finally it got so bad they said, ‘Now we have to cut your foot off,’” he recalls. Despite the amputation, he was denied disability multiple times and as a result sent his children to go live with grandparents in Louisiana.

“I mean, what do you do? I had kids to take care of, no money, you know? Nothing saved up or nothing like that,” Krytzer says. Disability eventually provided just enough money to move into a friend’s shack in Leona Valley near Palmdale, Calif. Krytzer negotiated his rent down to $700, which left him about $200 a month to live on, along with whatever shared income came in from his then-girlfriend Lisa.

Other nights he ate ramen and drank vodka to ease the phantom pains in his leg.

As dark as things seemed, a glimmer of hope came in 2011 when saw an episode of “Antiques Roadshow” in which an elderly Tucson, Ariz., man is shocked to learn that his First Phase Navajo blanket is actually worth around $500,000. The appraiser, Native American gallery owner and art collector Don Ellis, explains that the textiles were expensive even in their own era. They could cost as much as a high-status person back then made in four years. Unfortunately, no one else did.

Overlooking the value of something priceless

Krytzer showed the same video to his mother, who had just moved in after selling his grandmother’s house. “She goes, ‘Yeah right … probably nobody would give you freaking $10 for that thing.’”

The first antique dealers Krytzer went to turned him away. Others dismissed his find as a run-of-the-mill Mexican blanket. The last place he tried pointed him to John Moran Auctioneers, a local family-run auction company that had built up a reputation for selling Native American artifacts.

“I looked them up online and they had an ad for bringing in items, like an open [appraisal] day,” he recalls. After a 30-minute drive, Krytzer put the blanket in front of Jeff Moran. It would become what is still to this day the single most expensive item Moran’s company has ever sold at auction. Photos provided by Krytzer of his great-great-grandfather John Chantland (right) and his Mayville, ND trading post boosted the intrigue in the art community before the blanket’s auction. Loren Krytzer

“A lot of times a blanket or something will come to us and we won’t know the history of it,” Moran explains. It helped that Krytzer knew the blanket had been handed down for generations, starting with his great-great-grandfather John Chantland, a Dakota tradesman from the 1800s.

After Moran sent the blanket out for testing, the story seemed to line up. The textile was one of the finest and rarest Navajo chief’s blankets in the world, according to noted appraiser and specialist Joshua Baer, who was present at the auction six months later.

“This has only happened maybe three or four times with an unknown blanket where you see something and you know right away,” he explains. “You walk into the room [and] you can tell that you’re looking at something that is not just uncommonly beautiful, but that is still very much part of the time in which it was made.” Though Krytzer was told his verified Navajo blanket could fetch around $200,000, he needed money, and he was tempted by competing companies that offered to pay up front if he chose to pull out of his sale agreement with Moran just weeks before the auction date.

“I immediately went into crisis mode with him,” Moran tells CNBC Make It. “I said, ‘I’ll tell you what, I’m gonna give you an advance.’” On a Thursday night, Moran pulled off the 14 Freeway near Krytzer’s home into a Pizza Hut parking lot and gave him an envelope with over $9,000.

“I’ve done everything I said I would. Just stay the course,” Moran remembers telling him. Two weeks later, Krytzer indeed received a lot more than that.

$1.5 million in a record-setting auction

The auction took place on Tuesday, June 12, 2012. Moran had tempered Krytzer’s expectations as he headed into the room with Lisa.

“I was thinking [I’d] fix up my car a little bit,” Krytzer says. “I started praying, ‘Please be enough to buy a house or something.’”

Joshua Baer, the art and blanket appraiser, was in the room on behalf of a potential buyer. He likened the event to “a Fraiser-Ali kind of thing.” Employees hold up Krytzer’s Navajo blanket at the auction in a packed room at the Pasadena Convention Center. John Moran Auctioneers

The boxing metaphor was apt: The auction lasted only 77 seconds. A quick but fierce bidding war broke out between a phone buyer and Don Ellis, the very same Navajo blanket enthusiast who had appeared in the “Antiques Roadshow” episode that inspired Krytzer.

“I have a reputation for going after and being interested in the very, very best examples in my field,” Ellis tells CNBC Make It.

“They had to bring over water and stuff to me and wipe sweat off my head,” Krytzer recalls. “I started hyperventilating because I couldn’t believe it. … Everything just went limp and I couldn’t catch my breath.” Krytzer was brought to tears once the price of his blanket crossed the $1 million threshold at auction. John Moran Auctioneers

The happy ending came as a relief for Moran, too, who had gambled and turned down private offers in order to bring the blanket to auction. After fees, Krytzer received $1.3 million for a blanket that had, only years before, served as the catch-cloth for a litter of kittens.

“I would call the 1-800 number for Wells Fargo … and it would say, ‘Your balance is one-point’ and I would play it [on speakerphone],” he laughs.

Still, in the immediate aftermath of the auction, Krytzer says he was a mess. He got calls from distant relatives asking for a cut and suffered from frequent anxiety attacks. His sister threatened to sue him before backing down.

“It was just hard to grasp,” he says. “I mean, I worked hard my whole life. I was in construction, I never bought anything, I never saved, I always rented. I bought used cars cause that’s all I could afford. I lived paycheck to paycheck my whole life.”

After the auction he spent five days in a hotel alone to decompress. Krytzer also purchased a Harley Davidson with part of the $1.3 million he received at auction. Loren Krytzer

Before he was set to receive his payout, Moran called and asked Krytzer to come into the office for a quick lesson on “the time value of money.”

“I paid our CPA for four hours to sit down with Loren,” Moran recalls. “We’ve come too far and worked too hard to not do this. … I wanted so much to change his outlook and his journey ahead.”

Most of the lesson took hold. Krytzer says he invested in stocks and some municipal bonds, as well as two houses: one $250,000 home he lives in with his now-wife Lisa, complete with a pool and a view of the valley, as well as a second property that he rents out.

“It’s like, I never had money before, but OK, what do rich people have? When they have this money, what do they do?”

He also splurged on some luxuries, like the 2012 Dodge Challenger SRT8 he bought new and souped up from West Coast Customs, the mechanic shop made famous by MTV’s “Pimp My Ride.” Krytzer’s first big purchase, a brand new 2012 Dodge Challenger SRT8 couldn’t have come at a better time. His last car had over 200,000 miles and was burning oil. Loren Krytzer

“I never had nothing like that, so I wanted a nice car and I did, I bought one,” he says.

Then came the cruise to Mexico with his wife and her three daughters as a pre-honeymoon trip. “I had never been on a cruise ship,” Krytzer explains.

The money helped improve Krytzer’s health: He’s sitting around less and enjoying the outdoors more often with camping and fishing trips. “For the first time in years I’m actually able to walk with my wife and hold her hand down the street,” he says.

“I mean, I have a home, a beautiful home, and several cars, but I’d give anything to still be working,” he says. “Sitting around even if you’re in a nice home or you’re living in a shack, you’re sitting around bored doing nothing.” And while Krytzer’s anxiety has faded away, his concerns about money are just as present as they were before. Since the windfall, he no longer receives disability payments and he has learned that even $1.3 million goes fast when there’s no more money coming in.

The $10,000 in insurance and property taxes he pays for his houses each year add up, too.

“We’re getting taxed to death here, I can’t afford it,” he says. “I’m from California, I grew up here, but without working it’s just hard to survive.” The couple is looking into selling their house and moving north to Idaho where taxes aren’t as burdensome and life is more affordable.

I never had money before, but OK, what do rich people have? When they have this money, what do they do?

“The taxes on the house is half of what it is here,” Krytzer explains. “I’m thinking if I can go there I can kind of keep what I have, buy another house ... and maybe try to get some kind of part-time job ... I’m just hoping that we can survive and keep going.”

Survival, Krytzer admits with a smile, has gotten a bit easier since the auction, which he credits for saving his life.

“I firmly believe I’m here because years ago I turned my life around,” he says. “The things I’ve been through, I tell people it’s a strong faith and a strong mind. Without those things you’re not going to make it.”

As for gallery owner Don Ellis, he went on to sell the Chantland blanket in 2016 to Charles and Valerie Diker for an amount greater than $1.8 million. While the Dikers previously announced a promised gift of their Native American art collection to New York City’s Metropolitan Museum of Art, the couple declined to comment on whether the Chantland blanket would be a part of that collection. That is set to debut at the Met in October 2018.