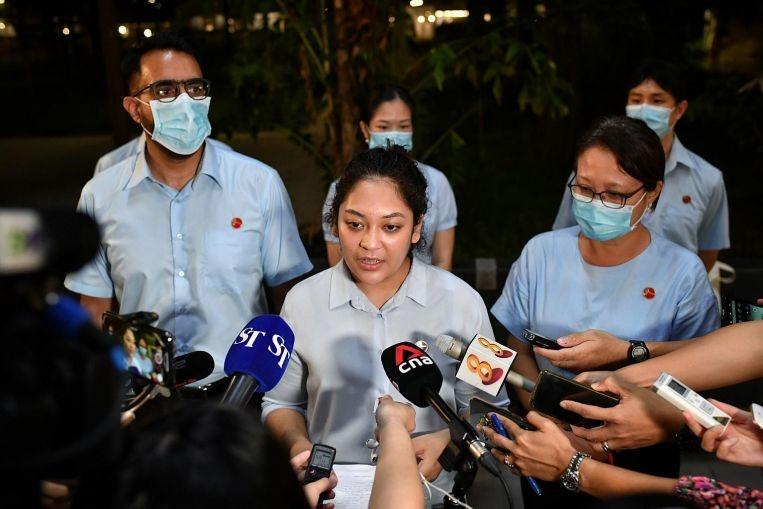 A day after Raeesah's speech, she was pressed by Leader of the Opposition Pritam Singh to “make her best efforts to contact the victim or to contact the individuals” involved as authorities sought more details.

On 7th August 2021, Raeesah spoke with Leader of the Opposition Pritam Singh over the phone and confessed that she had told a lie in Parliament.

The next day on 8th August, a meeting between Raeesah and WP's leadership which included Sylvia Lim and Faisal Manap took place at Pritam's house.

At the meeting, Raeesah confessed to her party leadership and told them that she had lied in Parliament on Aug 3, and that she had no way of substantiating the statements she had made.

Raeesah pulls out the #MeToo card; Pritam changed his mind about having Raeesah report herself to the COP

While Pritam initially tasked Raeesah to report herself to the COP, he changed his mind after Raeesah explained her circumstances.

According to Pritam in a press conference on Thursday (Dec 2), he explained that during the meeting, Raeesah also disclosed some "disturbing personal revalations" that included her own sexual assault.

“Initially, Raeesah stuck to her untruth in her communication with me,” said Pritam.

“After being repeatedly pressed, a number of new facts and disturbing personal revelations were disclosed. These concerned Raeesah’s sexual assault and events which were unknown to the party leadership at that time, and other related matters of a deeply personal nature," he added.

Of “immediate concern” to Pritam was that Raeesah had not previously informed her family members of her sexual assault.

In light of Raeesah's #MeToo moment, Pritam decided that it would be in her best interest to inform her loved ones first about the new revelations before addressing the reasons behind her falsehood.

“In my judgment, it was important that she did so before she could fully address the reasons behind her untruthful conduct in Parliament, and to correct the record."

"In view of a sexual assault and my assessment of her state of mind, I was prepared to give her the space necessary to address the matter with her loved ones.”

He also added that he did not give her a “direct timeline” to correct herself.

“I suppose one could make an argument that it could have been faster but in my judgment, given where she was emotionally, I took the decision that she had to close that loop with her parents.”

Shortly after the meeting, Raeeseh sent a text to her secretarial assistant Loh Pei Ying and WP volunteer Yudhishthra Nathan:

"Hey guys, I just met pritam, Sylvia and Faisal. And we spoke about the Muslim issue and the police accusation. I told them what I told you guys, and they’ve agreed that the best thing to do is to take the information to the grave. They also suggested that I write a statement to send out this evening."

But did Pritam actually say that?

According to Pritam, Raeesah was not forthcoming with the truth and maintained that her accusations against the police were true when she was questioned by him shortly after the August 3 parliamentary speech.

Raeesah also claimed to not understand what Pritam's comments were when he wrote "substantiate?" on the draft of her speech which contained the contentious anecdote.

"There was a process that was undertaken. She had put that anecdote down. It was made known to her that you better be ready to substantiate this, because it is an allegation ... you can make that allegation and I don't think any of us will stop an MP from doing that. But she was put on notice to substantiate it. So the process did not fail in that regard. Why she didn't take heed of that instruction, why did she ignore it? That's not a question I can answer."

Afterall, Raeesah had wilfully propagated an untruth and tried to hide the fact even from her party leaders until she was pressed to come clean.

If she could withhold the truth from the leadership, would it be far-fetched to say she knowingly twisted the context of her message in order to rationalise her actions to her colleagues Loh and Nathan?