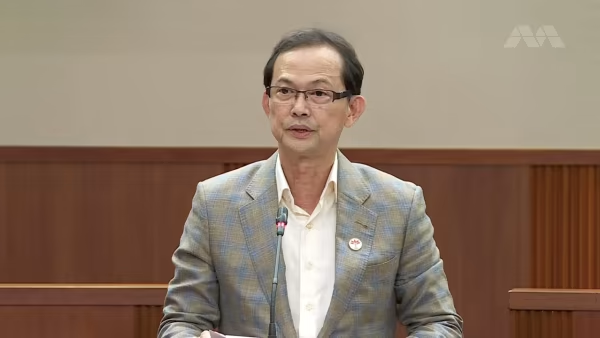 Leong said the public en bloc scheme for AMK was an "epochal event" in the history of public housing as affected residents had to top up to buy a replacement flat of the same size with a fresh 99-year lease.

The HDB announced in April 2022 that four HDB blocks - Blocks 562 to 565 in Ang Mo Kio Avenue 3 - had been selected under the Selective En-Bloc Relocation Scheme (SERS), a scheme aimed at rejuvenating older estates.

Some residents in the AMK SERS project were vexed that a same-size flat would require a significant top-up amount — in the excess of S$160,000 for some.

SERS has historically been viewed by the public as a 'lottery' by Singaporeans where you get a one-to-one swop with a fresh 99 year lease.

But it was not the case for AMK SERS.

Leong claims that Singaporeans have come to associate "en bloc" with windfalls and new homes so the SERS exercise in AMK where residents have to top up cash for a new flat is unprecendented.

SERS is not a windfall

Leong's understand of SERS can be simply summarised as such:

SERS = New flat in similar location with fresh 99-year lease for free + additional compensation paid out by the Government to affected residents, regardless if the house in question has a decaying lease.

National Development Minister Desmond Lim had cited lease decay as the reason why residents had to top up for new flats.

But Leong argues that residents in Marsiling involved in an en bloc did not have to top up for their replacement flats, despite having 58 to 59 years left on their lease - slightly longer than the 57 years for the Ang Mo Kio flats.

This is the key reason why Ang Mo Kio residents have suffered a worse outcome than that of Marsiling residents and past SERS exercises, he added.

Sim responded by stating that compensation for SERS has never been intentionally pegged to the price of a new flat of similar size in a similar location on a fresh 99-year lease.

"It was not pegged to the subsidised price of new flats, nor designed to create a windfall. It so happened during past SERS exercises, that the outcome was quite advantageous for most flat owners, because the age of their flats was not so old."

"A different outcome would occur if the age of the flats involved in the SERS was older," she added.

This, Sim said, was what happened in the Ang Mo Kio SERS, and would be the case in future SERS exercises if the flats involved are of similar age.

VERS is definitely not a windfall

Leong believes that VERS will not be a viable option if it uses the same compensation calculation as SERS.

He claimed that Singaporeans are expecting SERS to be a scheme where residents are paid, but if VERS is similar to the outcome of the AMK SERS, then they have to pay.

"The likelihood of any VERS proposal being approved will also be nil because Singaporeans have come to associate “en bloc” with windfalls and new homes, and the redevelopment of mature estates envisioned by VERS will not materialise," Leong said.

The VERS scheme was announced by Prime Minister Lee Hsien Loong in his National Day Rally speech in 2018. PM Lee said that VERS is a "long term plan", and the government "will not start doing VERS for another 20 years".

SERS is not meant to extend a decaying lease for free to 99 years, Sim said.

That is not the basis on which SERS compensation is determined. Rather, it is determined by a fair, independent assessment taking reference from market value.

Nor is VERS meant to extend a diminishing lease for free for 99 years. The alternative is to stay in the flat until the 99 year lease is up, after which they have to find a new flat on a new lease.