22-year-old new citizen Navya Singh recently published a series of TikToks decrying Chinese privilege in Singapore and even went so far as to make comparisons between the 2021 Atlanta spa shootings and the conduct of non-Chinese Singaporeans.

She rambled about how Chinese in Singapore "had it easy" without having to fear any similar attacks by the Indians and Malays here.

The spa shootings in Atlanta that happened in March this year resulted in eight people killed, in which six of the victims were women of Asian descent. While not categorised as a hate crime, authorities at the time said race cannot be ruled out as a motive.

Navya's videos was a follow-up to Prime Minister Lee Hsien Loong's national day rally speech where he said there is no Chinese privilege in Singapore.

In the 3-part TikTok videos, Navya talked about a few examples of Chinese privilege:

Navya spoke about how Chinese students are "lucky" to be able to learn their own language on regular school days without having to attend extra mother tongue classes on Saturday.

She also said that because of this extra classes, students like her can't get a proper full weekend rest.

Admittedly, Navya acknowledged that it wasn't the strongest example as other minority races like the Indian and Malays also get to study their own languages on regular school days but for those who speak other languages like Hindi, Urdu or Punjabi, they are the most affected.

Navya is originally from India and is believed to speak Hindi.

Navya does not think that the education officials here are providing enough resources and time to train more mother tongue teachers for specific languages.

According to Navya, training more language-specific teachers to teach mother tongue on regular school days would be a better option than to be "dumped" in a language center on a Saturday.

Jobs in Singapore are geared towards the Chinese

Navya claimed that most jobs in Singapore want mandarin-speaking applicants despite anti-discrimination laws in Singapore. She feels the authorities are not doing enough to provide equal opportunities to minority races.

Navya doesn't believe the race quota set in HDB promotes racial harmony. She doesn't think that putting different races in a HDB block mean everyone will be inclusive.

She recounted how the kids of her "racist f***ing neighbour" would kick her rangoli (sand art usually placed at the door) during Diwali. She also claimed the neighbour laughed it off and spat at it.

In bringing up the Atlanta spa shootings, Navya suggested that despite the racist incidents faced by Indians in Singapore, the Chinese did not have to worry about similar attacks by non-Chinese. 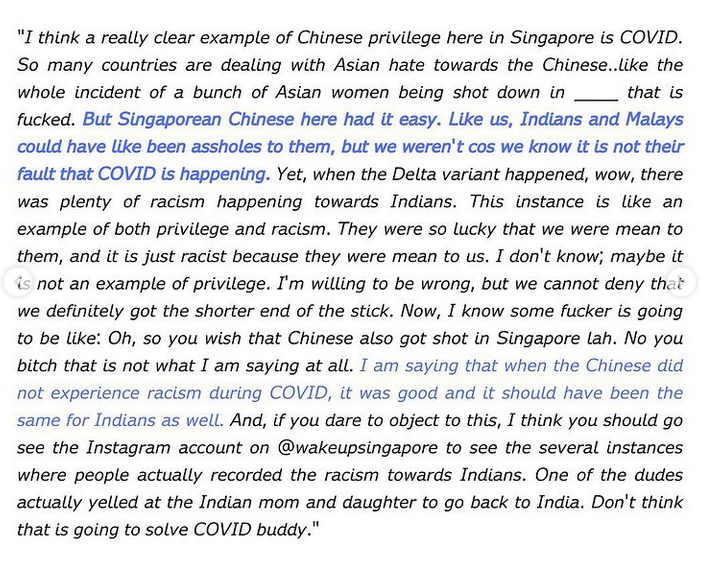 A "social harmony" activist took offence at Navya surfacing the Atlanta spa shootings as a pretext to make her point about Chinese privilege in Singapore.

Nazhath Faheema took to Instagram to express her outrage at what she believes to be vengeful racism on the part of Navya and that sensationalised "retort-like" content should not be the way to handle racial harmony issues. 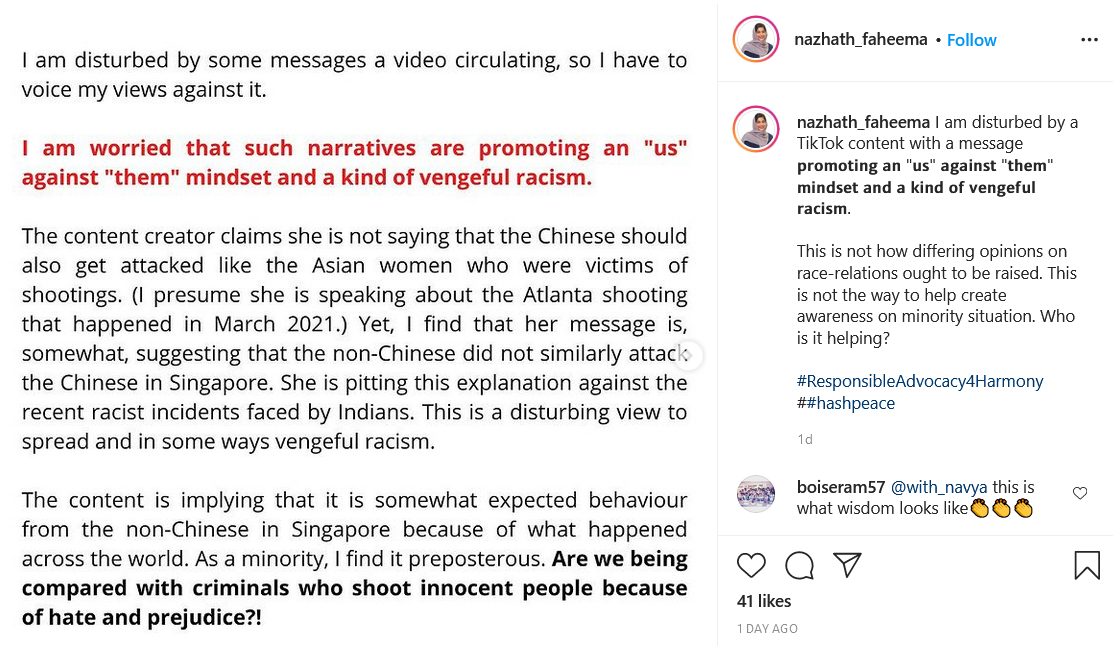 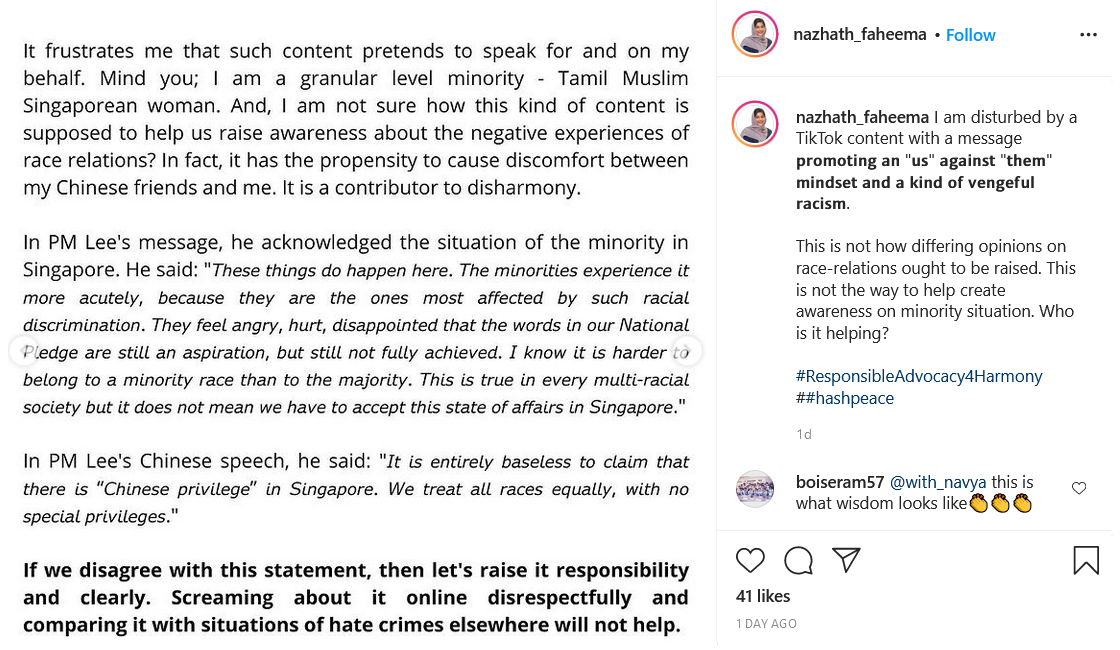 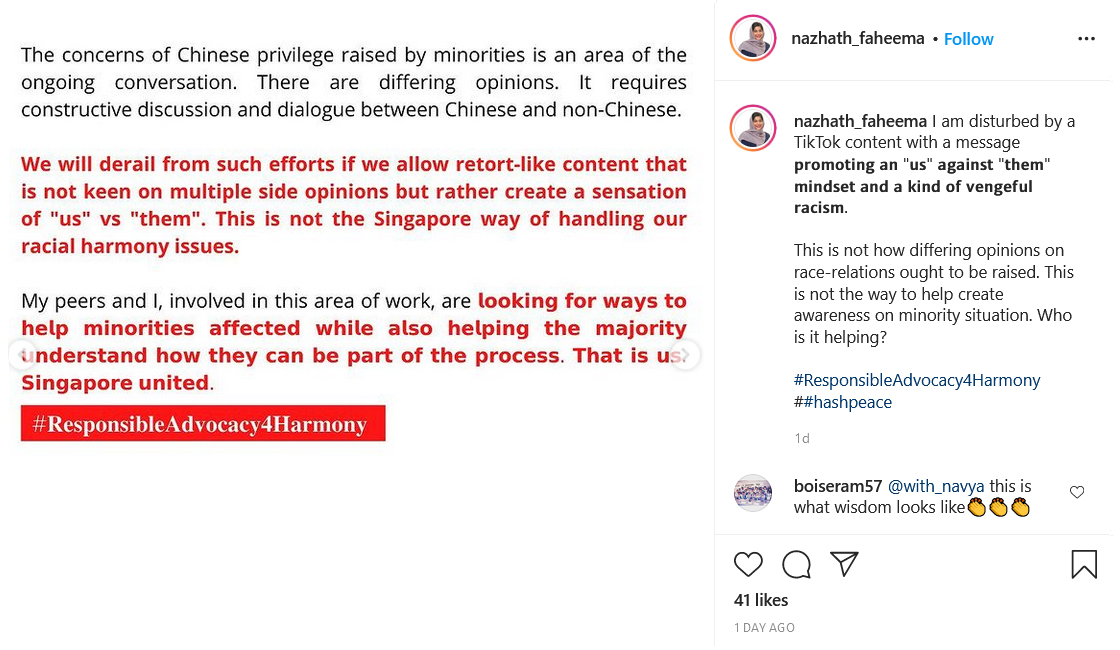 Shortly after Nazhath's Instagram post, Navya replied in the comment section and offered to get on a call. Nazhath suggested that they meet instead over dinner for a casual "dialogue" the following week. 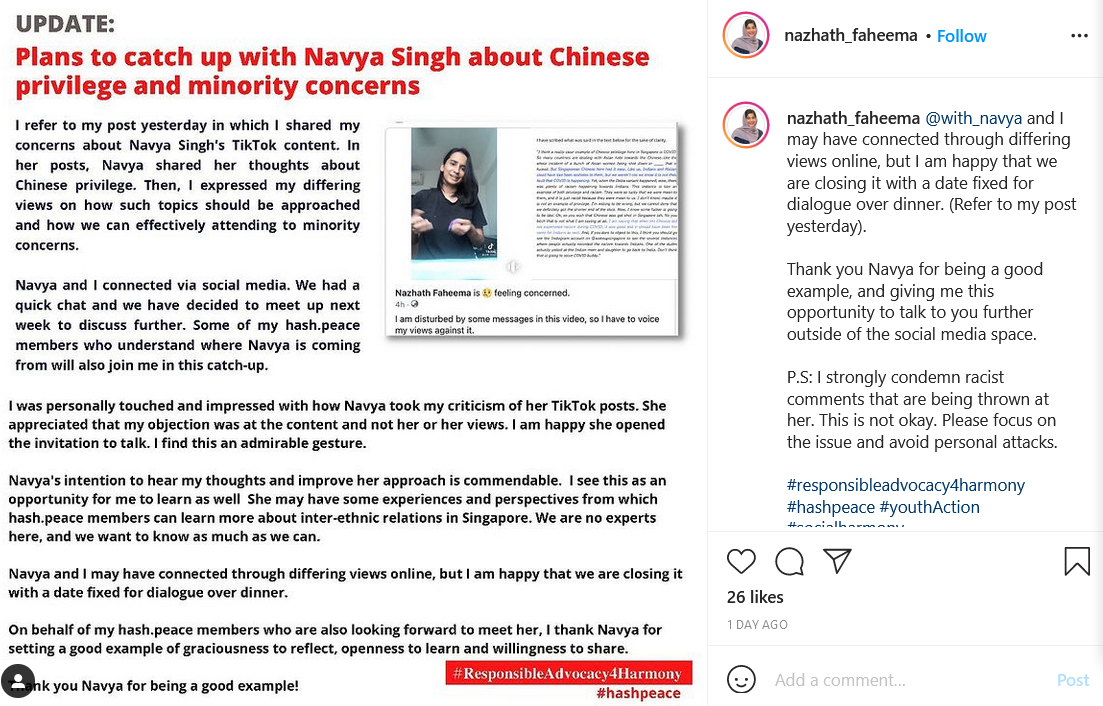