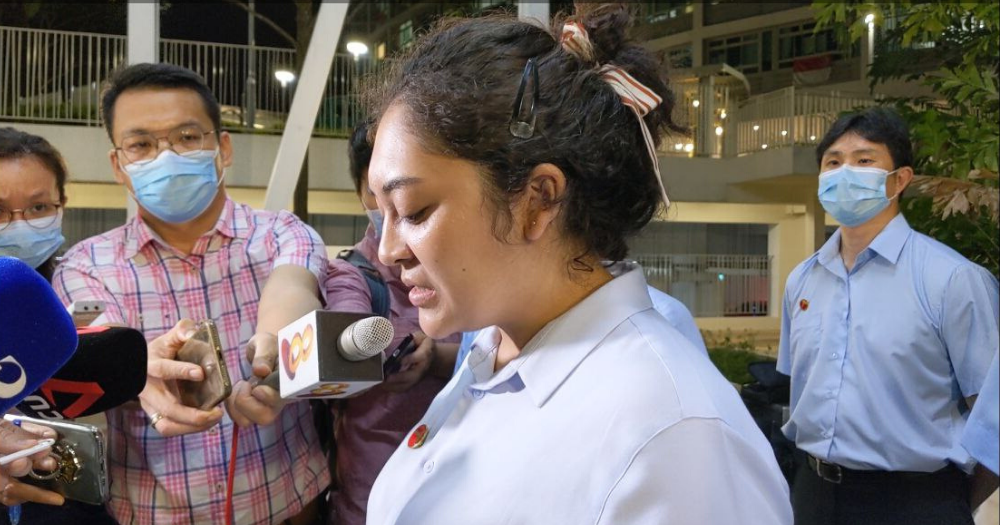 Police said in a statement on Sunday (July 5) that Ms Khan had allegedly commented that Singapore law enforcement authorities discriminated against minorities, and that compared with other groups, rich Chinese and white people were treated differently under the law.

In the context of a news article on the City Harvest Church ruling, she was also alleged to have commented that Singapore jailed minorities mercilessly, harassed mosque leaders but let corrupt church leaders free. 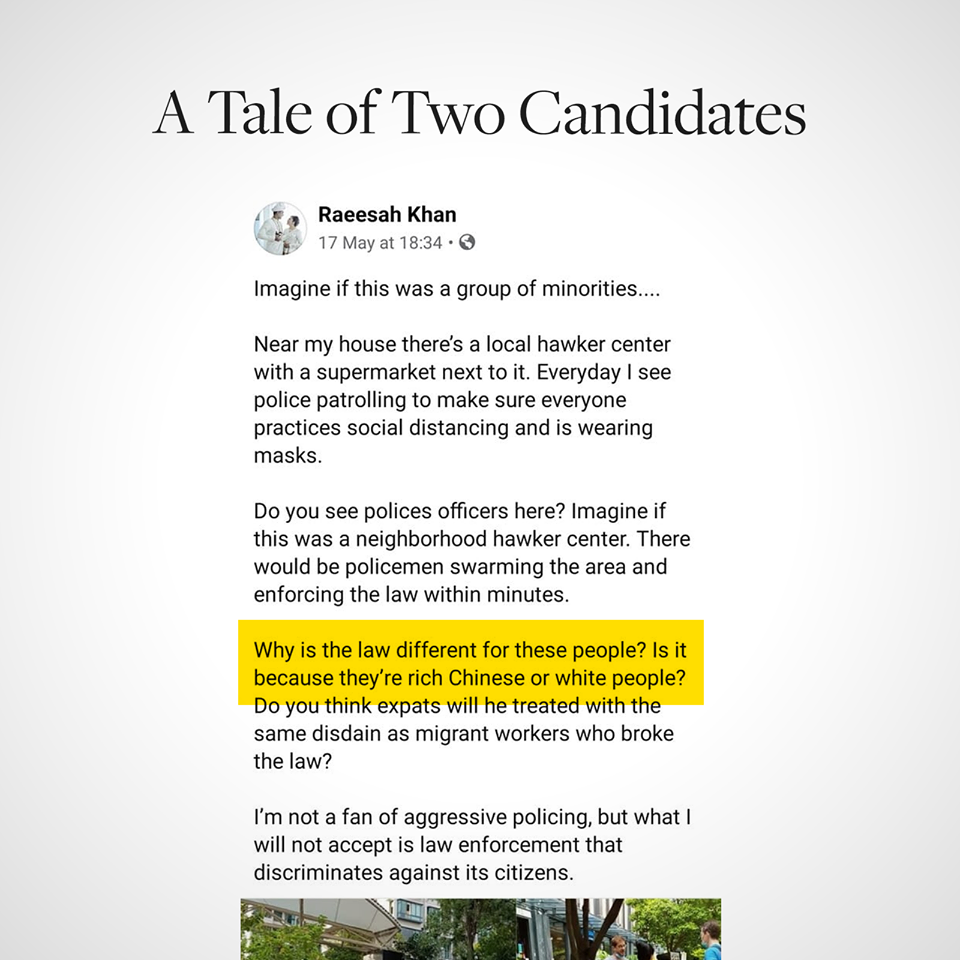 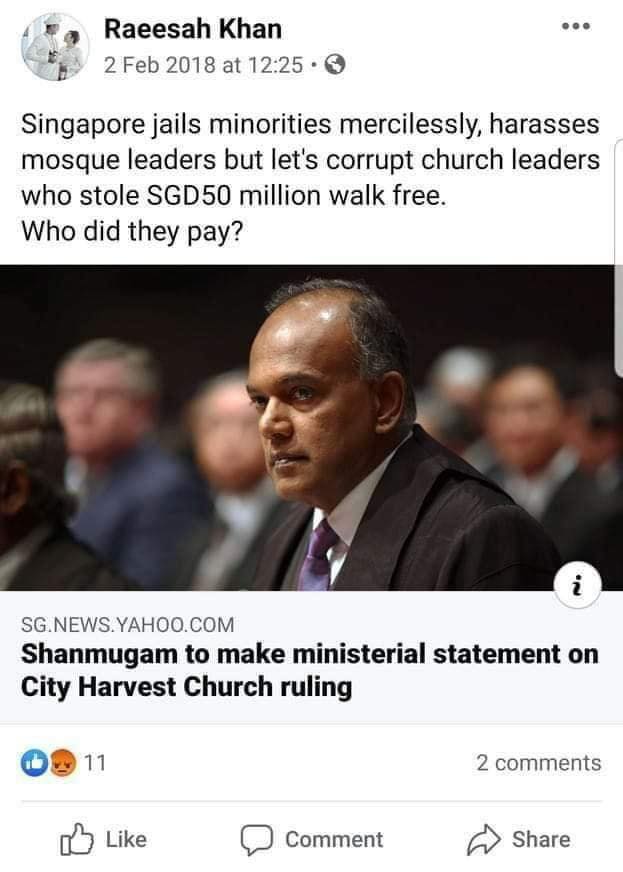 The gist of the arguments put forth by the supporters was that Ms Khan was merely addressing the "systemic" racism and discrimination against the minorities. They asserted that she was unfairly silenced for speaking out against racial inequalities. 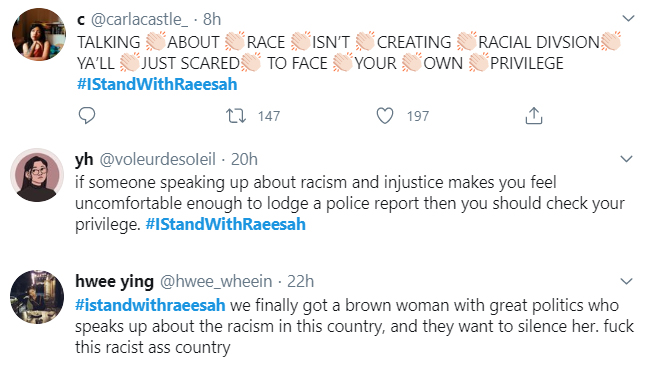 On the opposing camp were netizens who argued that Ms Khan's comments were contemptuous in nature, and not so much an issue about discrimination, which was what Ms Khan's supporters were reframing their arguments by.

In a nutshell, netizens argued that many are overlooking the fact that what Ms Khan said is a chargeable offence, regardless if the messaging was well-intentioned. 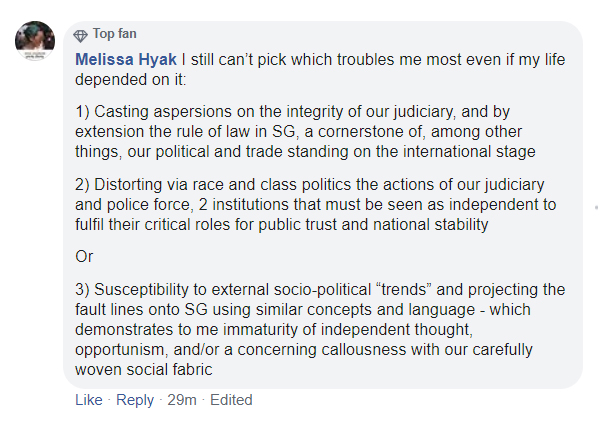 Ms Khan, who is the WP’s youngest candidate this General Election and part of the four-member team contesting in Sengkang GRC, said her “intention was never to cause any social division but to raise awareness” on a myriad of social concerns.

“I apologise to any racial group or community who have been hurt by my comments. My remarks were insensitive, and I regret making them,” she told reporters hours after the police statement was released.

“I feel really passionate about minority issues regardless of race and in my passion, I made improper remarks and I have to be accountable for them,” she said, adding that she will “fully cooperate in any police investigations”.

Some netizens felt that Ms Khan's apology was sincere, and that it was telling of someone who is brave enough to own up to her mistakes:

Others were less sympathetic:

Some compared Ms Khan to People Action Party's (PAP) Ivan Lim who was previously criticised by netizens after allegations of elitism and poor mannerisms surfaced, insinuating that there is a certain level of double standards by netizens when it comes to condemning a candidate from the incumbent vis-a-vis Ms Khan: 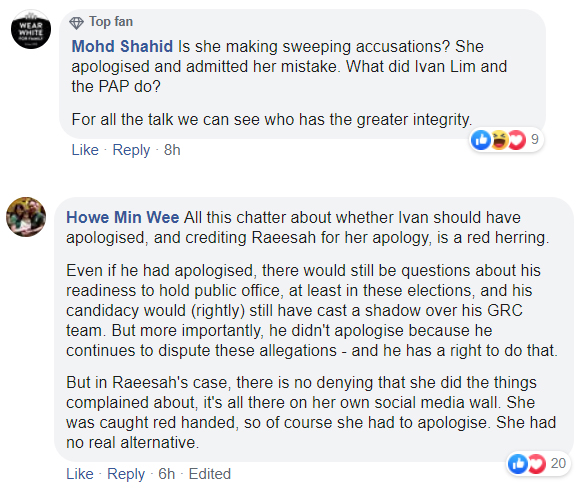 Ms Khan insinuated that "rich Chinese and white people were treated differently under the law." On the contrary, it is an established fact that Singapore law is applied to everyone equally. Some of the more prominent cases are:

In June 2020, a 19-year-old Singapore Permanent Resident Chinese male was arrested for his suspected involvement in inciting violence and posting comments with deliberate intent to wound religious feelings on social media.

In January 2019, a 31-year-old Singaporean Chinese was arrested and charged for "racially motivated vandalism" that included messages such as "MALAY MATI" meaning "Malay die".

Just last month (Jun 25), 6 Caucasians were fined and had their work passes revoked for breaching circuit breaker measures at Robertson Quay. All 6 are now permanently banned from working in Singapore.

Responses by the Workers' Party and the People's Action Party

Responding to questions from the media, WP's leader Pritam Singh said the party would stand behind its Ms Khan and the Sengkang team.

Asked if this matter would affect Ms Khan's candidacy, Mr Singh said it was too early to talk about it and that the police investigations would have to be allowed to take its course.

He added that he had not known about the Facebook posts beforehand, but noted that at 26-years-old, Ms Khan is WP's youngest candidate in this election and comes from a generation that has "completely grown up on social media".

"And for me, I would be actually a bit disappointed if our candidates try to sanitise their past. And I think they should be upfront and authentic to the public. This is who they are. And in the event there are certain posts or certain comments that they may have made which are untoward, then I would expect them to explain themselves."

He added that he has no regrets fielding her and that she will continue with her campaign.

The PAP on Monday (July 6) called for WP to state its stand on social media posts made by Ms Khan.

“In fairness to voters, both in Sengkang and elsewhere, the WP should state its stand on Ms Raeesah’s posts, since she has admitted to making highly derogatory statements about Chinese and Christians,” the PAP said.

“Why does the WP still consider her worthy of consideration as an MP? This is a serious matter, which goes to the fundamental principles on which our country has been built.”