Why is IMDA dragging its feet in dealing with TOC? The Infocomm Media Development Authority (IMDA) has asked the local website The Online Citizen (TOC) to "explain its non-compliance" after it repeatedly failed" to declare all its funding sources.

IMDA said in a statement issued today (Sep 7) that they "may take appropriate enforcement action" for non-compliance.

A recalcitrant Terry Xu who is also the chief editor of TOC has responded on his Facebook that he intends to not comply with the requirements by IMDA.

According to IMDA, TOC has "repeatedly failed" to declare all its funding sources for its annual declaration since 2019, despite "multiple reminders and extensions", the regulator said. 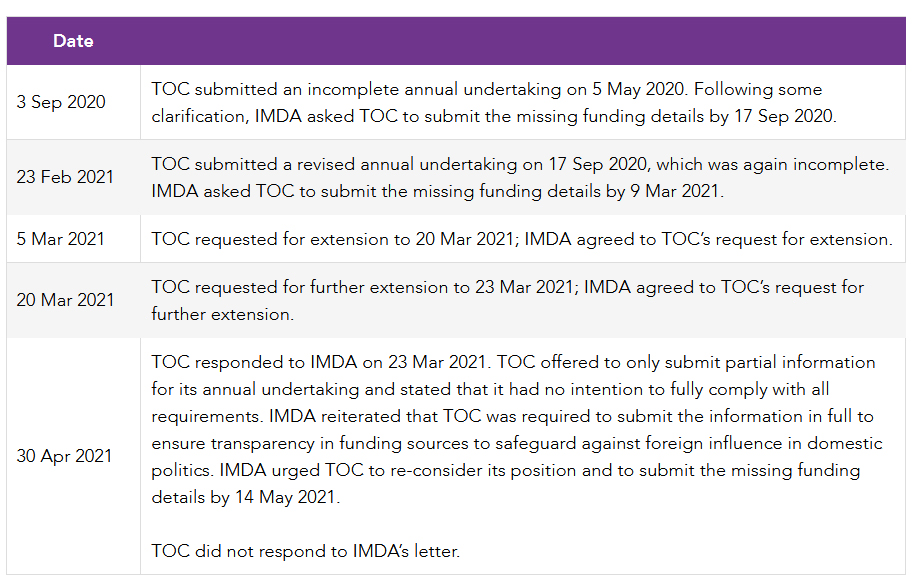 TOC previously complied when it first registered in 2018.

TOC "failed to verify (the identity of a) donor and to clarify discrepancies in its foreign advertising revenue" in its 2019 declaration, said IMDA, adding that it issued a warning for this in May this year.

TOC had initially refused to disclose the identity of two anonymous donors.

According to Terry, TOC already gave the identity of one of the donors but withheld information on the other anonymous donor, preferring to donate the money instead.

Terry has so far refused to explain why he is withholding information on the second donor.

On "discrepancies in its foreign advertising revenue", Terry said it was "just a mistake" in the figures submitted.

Terry also said that TOC is not complying with IMDA because of the authority's "unjustified attempt to scrutinise how TOC conducts its business."

IMDA had asked TOC to justify the subscription fees it was charging, from which it collected about $9,200 in annual income for the year, after it found that there were no discerning benefits between subscribers who paid a lower fee and those subscribing on a higher tier. 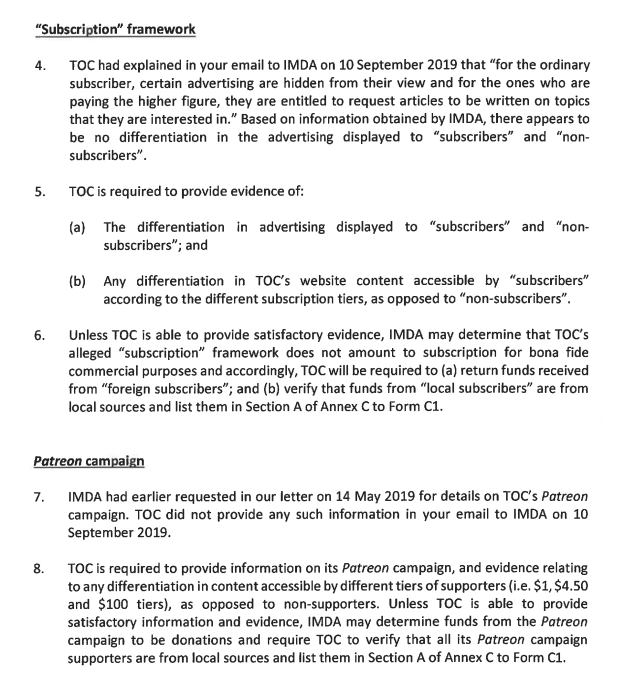 In response, Terry said he wants IMDA to exempt its subscription model from the declaration.

"TOC had offered to fill in the declaration if the subscription portion could be exempted from the declaration, (but) IMDA rejected the proposal," Terry said.

When will IMDA's patience run out with TOC?

The authorities have so far refrained from shutting down The Online Citizen over its non-compliance since 2019 despite having the opportunity to do.

Terry Xu emboldened by easy cash from the public to pay for his trangressions have shown no signs of backing down.