Britons today enjoyed the hottest day of the year so far by flocking in their thousands to parks and beaches - but it is set to get even hotter tomorrow.

The temperature reached 84.7F (29.3C) at Heathrow and Kew Gardens, according to the Met Office. It surpasses the previous hottest day of the year yesterday when 82.76F (28.2C) was recorded, again at Kew Gardens.

Parks and tourist hotspots in the capital were packed, whilst beaches in places including Bournemouth, Dorset - where temperatures are at 73F (23C) - also filled up with sunbathers.

The warm weather has been driven in part by hot air from Spain and Portugal. Both countries have seen temperatures rising beyond 104F (40C) amid an ongoing heatwave. 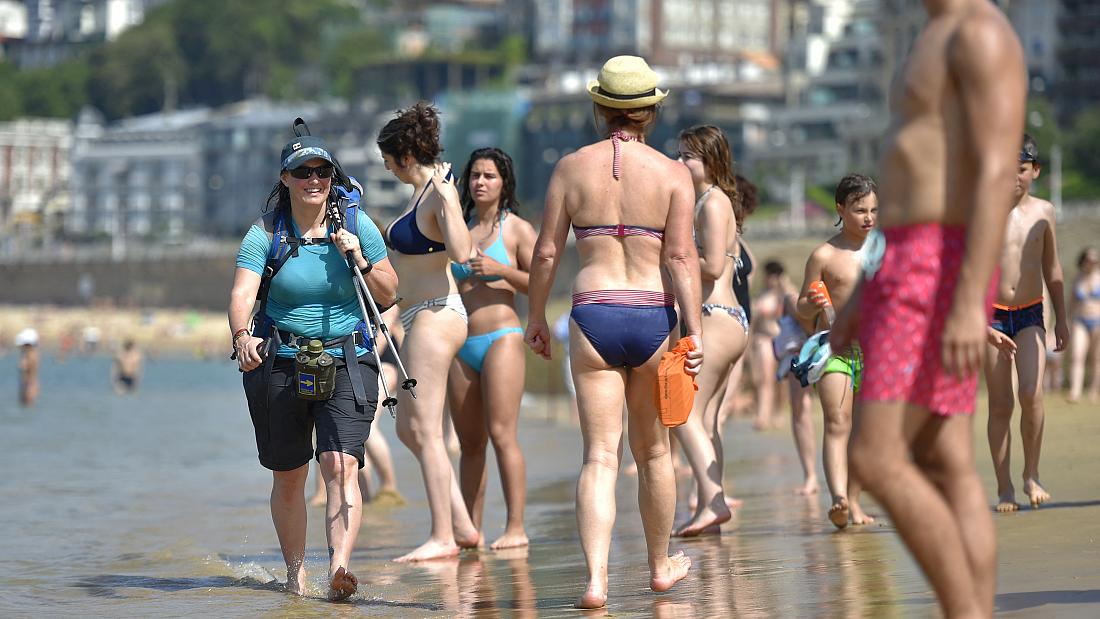 'Reaching 34C during June is a rare, but not unprecedented, event in the historical climate records for the UK. But if it should happen this week it would be notable that it would have occurred on three days during the last six Junes.'

The UK's hot weather has been brought on in part by south-westerly winds bringing warm air from an ongoing heatwave in Spain, Portugal and southern France.

In France and Portugal, temperatures have hit similar levels. Paris is set to see temperatures of 86F (30C) today, whilst Madrid will bask in highs of 97F (36C).

The extreme heat has seen wildfires break out in parts of Spain.

The most alarming blaze, near Baldomar in Catalonia, has already destroyed 500 hectares of forest but could spread to over 20,000, the government in the northwestern region said.

No-one has been evacuated yet but the Catalan authorities have cordoned off several residential areas as a precaution.

What is the definition of a UK heatwave?

A UK heatwave threshold is met when a location records a period of at least three consecutive days with daily maximum temperatures meeting or exceeding the heatwave temperature threshold.

The threshold varies by region. Generally -

In Lerida province, where Baldomar is located, temperatures reached 105.8F (41C) on Thursday.

Spanish meteorologial office AEMET also forecast temperatures above 104F (40C) in Badajoz in the southwest and Zaragoza in the northeast.

Two other wildfires were raging in Catalonia on Thursday morning, in Lerida and Tarragona provinces, and had destroyed nearly 300 hectares, the Catalan authorities said.

Another was burning in the Sierra de la Culebra mountains in Zamora, central Spain.

The six-day-old heatwave, exceptional in Spain for this time of year, has affected the entire country and is forecast to last until Saturday, AEMET said.

Spain recorded its hottest May since the start of the 21st century and has seen four extreme temperature episodes in less than a year.

In neighbouring Portugal, last month was the hottest May since 1931.

As global temperatures rise over time, heatwaves are predicted to become more frequent and intense, and their impacts more widespread.