Singapore is undergoing a political awakening where its citizens are now empowered more than ever to engage actively in the hustings of the General Election. From independent candidates to the who's who of who cares, everyone can participate and express their grievances without fear or favour.

Some netizens, however, have taken it up a notch by filing police reports against personalities and political figures over online publications they deemed to be violations of certain Singapore laws and to some extent, their feelings.

Several police reports have been lodged so far (see list below).

Not to be outdone, SMRT Feedback announced on Facebook today (Jul 7) that they have filed a report against themselves "so as to not feel left out". 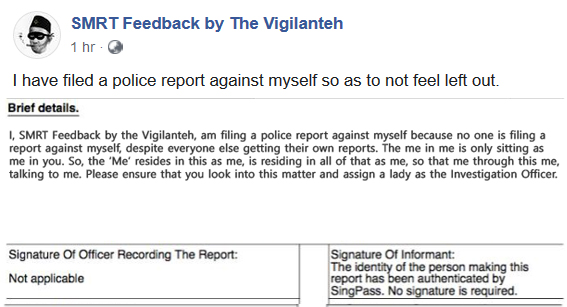 "I, SMRT Feedback by the Vigilanteh, am filing a police report against myself because no one is filing a report against myself, despite everyone else getting their own reports. The me in me is only sitting as me in you. So, the ‘Me’ resides in this as me, is residing in all of that as me, so that me through this me, talking to me. Please ensure that you look into this matter and assign a lady as the Investigation Officer."

Unsurprisingly, the police have not responded to our request for comments.

Here's a list of police reports filed so far

Two police reports were filed on Jul 4 and Jul 5, in relation to comments made by Workers' Party candidate Raeesah Khan alleging that the Singapore law enforcement authorities discriminated against citizens, and that compared to other groups, rich Chinese and white people were treated differently under the law. Raeesah has since apologised. The police are currently investigating.

Police reports were lodged against Deputy Prime Minister Heng Swee Keat, who is contesting in the East Coast Group Representation Constituency, in relation to his response to a question posed to him at a student’s forum at the Nanyang Technological University on March 28, 2019. Heng had been asked whether Singaporeans were ready for a non-Chinese Prime Minister.

The police on Tuesday (July 7) said that it has consulted with the Attorney-General’s Chambers who deemed that Mr Heng Swee Keat’s remarks at a student’s forum last year had no intent to wound anyone’s racial feelings or promote enmity between different races.

According to a screenshot posted by former nominated member of parliament Calvin Cheng, a netizen by the name of Phipps Jonathan had lodged a police report against the Minister for Education Ong Ye Kung on July 5

Jonathan said that Ong Ye Kung may have committed a possible offence by "abetting" a primary school child to participate in an election.

Vignesh found that Cheng, better known as Xiaxue, had posted on Twitter a comment he said was “trying to stir up anti-Indian sentiments.”

The tweet in question had read: “Coz they molest people and fuck our maids and leer at girls and flood little India!! Yeah I’m stereotyping, but fuck u if u say its not true.”

One Goh Jing Heng Alfred on Monday (Jul 6) said he has filed a police report against the ruling People’s Action Party over its statement regarding Workers’ Party candidate Raeesah Khan.

Goh claimed that PAP's statement implied that Raeesah Khan had “admitted to making highly derogatory statements about Chinese and Christians,” which Goh said was incorrect and falsely accused Khan of admitting to something she did not. Goh added that the statement by PAP itself promotes enmity between different groups on grounds of religion and race by promoting false narratives which seek to divide rather than unite Singaporeans.

Terry Xu, who is the Chief Editor of The Online Citizen (TOC) announced today (Jul 7) that he had filed a police report against popular commentary page Critical Spectator for "foreign inteference".

Michael Petraeus, who runs Critical Spectator is a Polish nation who regularly posts opinion pieces about current affairs that include Singapore. His writings are published on his Facebook page and website.

According to Xu, posts published by Petraeus show a "clear intent to influence the election" which is against the Parliament Election Act.

When questioned by netizens, Xu blamed the high costs of hiring Singaporean writers. It is understood that Malaysian writers hired by TOC are paid at a rate of USD 15 per hour.

Xu later rebranded The Online Citizen to "The Online Citizen Asia", purportedly to establish itself as a media platform covering international affairs. SMRT Feedback, however, asserts that the rebranding was a cover for TOC to continue using foreign writers to interfere in Singapore's socio-political affairs.