Raeesah Khan: Tudung for nurses not enough, other uniformed groups should follow too In a tweet published yesterday (Aug 30), Worker's Party MP Raeesah Khan commended the Government for allowing Muslims in the healthcare sector to don the tudung at work but feels that other uniformed groups should follow suit too.

According to Raeesah, "many other workplaces still discriminate against the traditional garb, such as other uniformed public service roles."

To push for further concessions, Raeesah believes that the society needs to be educated on the various forms of religious expressions and for Singaporeans to embrace differences.

In addition, Raeesah wants Singaporeans to "interrogate" their "preconceived notions and stereotypes against minority races, so that we do not judge each other superficially."

One netizen also tweeted - in response to Raeesah Khan - that the Ministry of Education should allow the "hijab/niqab (full face covering)" for school students as religious values should be cultivated from young.

Is it ever enough?

While many netizens supported the Government's move, there is also a larger segment of Singaporeans questioning if we are forgoing the neutrality of public service in favour of more religious wants and needs. 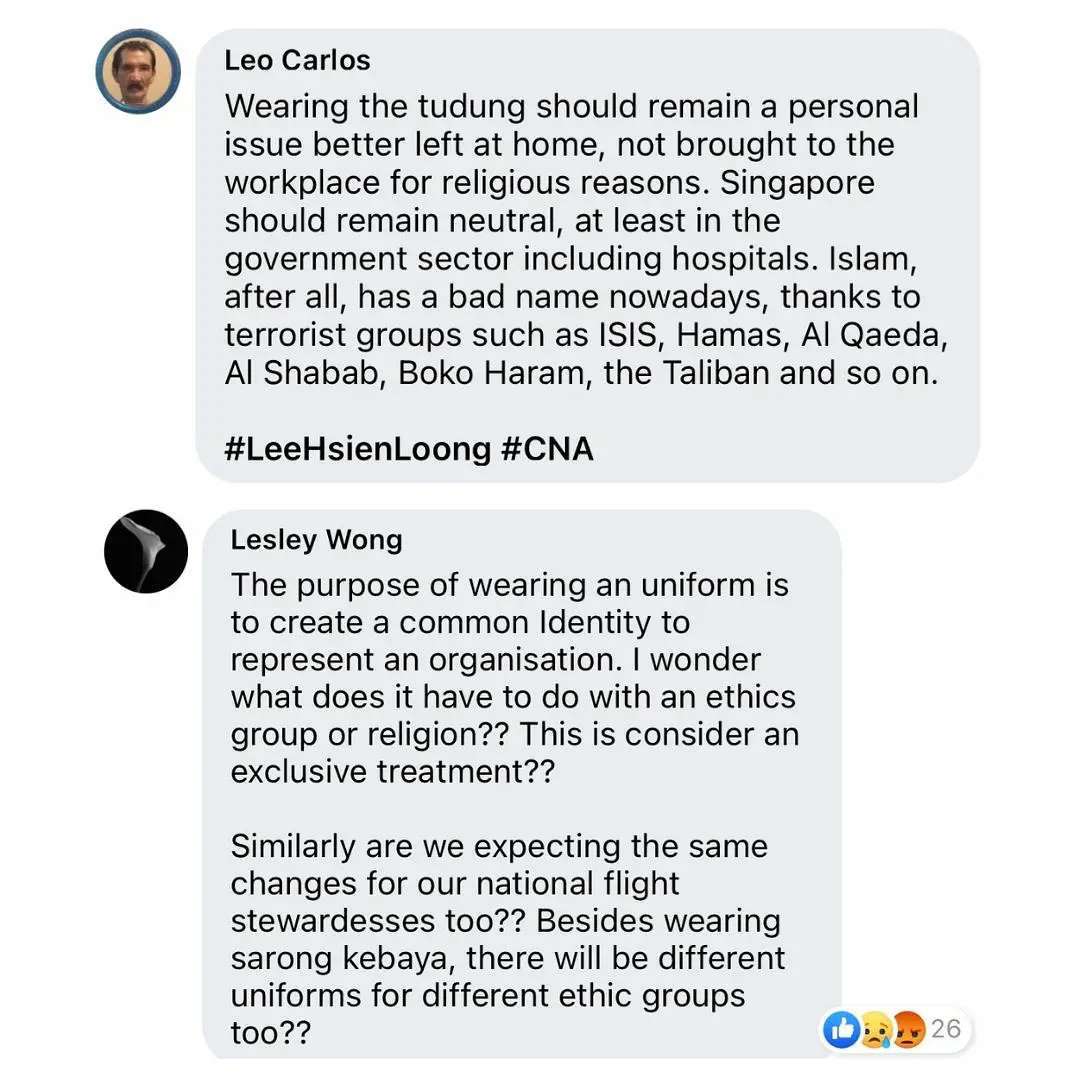 One netizen said, "Today nurses are allowed to wear the tudung, tomorrow, people will start asking for the tudung in primary schools for children. Next, we will have various ethnic and religious groups lobbying for more rights. Is it ever enough?"

Explaining why the uniform policy in the public service cannot be tilted towards any religious belief, Minister-in-charge of Muslim Affairs Masagos Zulkifli said that in services that play a critical role in society, the uniform is a "visible sign that service is rendered equally regardless of race or religion".

"Allowing tudungs will raise a very visible religious marker that identifies every tudung-wearing female nurse or uniform officer as a Muslim. This has significant implications," he added.

"We don't want patients to prefer or not prefer to be served by a Muslim nurse, nor do we want people to think that public security is being enforced by a Muslim or non-Muslim officer.

"This is what makes the decision difficult and sensitive."

Any government concession to religious pressure could cause other groups to adopt a similar aggressive posture, and race and religion will become increasingly polarising, Masagos said.

“This will harm all of us, especially the minority community," he added.