An Australian man admitted in a Singapore district court on Friday (Feb 25) that he had anti-Muslim thoughts when he flung a wine bottle from the seventh storey of a condominium in Spottiswoode Park Road in 2019.

Andrew Gosling, 49, a former SAP Consultant, committed the act as he was "angry and upset" about Islamist terrorist bombings that had killed 88 Australians in Bali in 2002 and Islamic State linked stabbings in Melbourne in 2018.

The bottle killed 73-year-old delivery driver Nasiari Sunee and injured his wife Manisah as they were about to sit down to dinner for a friend’s housewarming at the Spottiswoode apartment block in central Singapore.

The court heard that Gosling entered Singapore on July 15, 2019 to look for a job here and rented a unit on the seventh storey of the Spottiswoode 18 condominium the following month.

After consuming alcohol on Aug 18, 2019, he peered from his balcony and saw a group of Malay-Muslims having a gathering at a barbecue area two storeys below. Mr Nasiari and his wife were part of it.

The prosecutors said that during investigations, Gosling admitted that a thought crossed his mind that he “ought to use a weapon, such as a gun” to shoot the group comprising about 15 people.

But he later dismissed this thought as he felt that it would be a “heinous” act.

At around 8.30pm, Gosling left his home to throw some rubbish at a common chute at a lift lobby.

While he was there, he found an empty wine bottle, which weighed about 600g, and flung it towards the group to “startle” them.

After that, he ran back to his apartment while yelling religiously charged vulgarities about Muslims.

The bottle hit the couple, and two ambulances took them to the Singapore General Hospital. 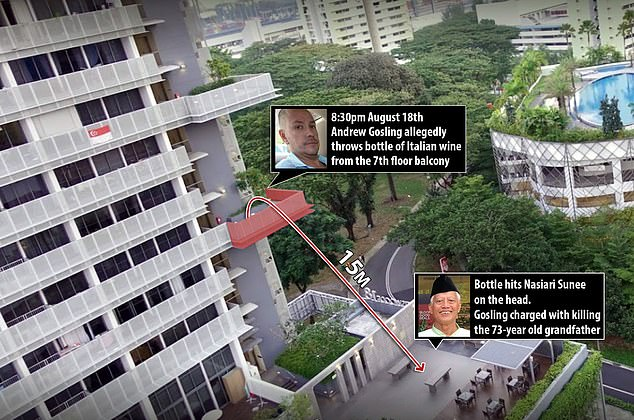 Following the incident, the police went door to door at the 35-storey condo to look for suspects.

Residents said officers had shown them a picture of an Italian wine bottle.

They were also asked if they had been drinking wine and whether they were willing to provide fingerprint samples.

On Aug 20, 2019, two officers interviewed Gosling and showed him the bottle. He lied, claiming he had never seen it before.

Three days later, Gosling was told to present himself at the Central Police Division to provide a statement.

He then realised that the bottle could be traced to him after he provided his DNA and fingerprints to the authorities. Gosling finally surrendered to the police on Aug 28, 2019.

The lawyers said in their mitigation plea that Gosling’s actions during the incident did not reflect his true intentions and were unlikely to have been religiously motivated.

They told the court: “The words that the accused uttered did not carry the weight of any anti-Muslim tendencies – rather, they were a result of his negative obsessive thoughts that manifested while he was intoxicated.

“The thoughts that were verbalised were a product of his disinhibited and impaired mental state at the time and the fact that he was prone to negativity when he drank.”

He cowardly fled the scene after throwing the bottle to evade detection, shouting crude, religiously charged vulgarities about Muslims.”

Gosling is expected to be sentenced in April.

For causing a death by committing a rash act, an offender can be jailed for up to five years and fined.

For causing grievous hurt to another person by performing a rash act, an offender can be jailed for up to four years and fined up to $10,000.