Following Workers' Party (WP) MP Raeesah Khan's speech in Parliament on Tuesday (Aug 3), netizens criticised the 27-year-old MP for her lack of political maturity in surfacing allegations without backing it up with facts.

During her speech on the gender equality motion in Parliament, Raeesah said that she had accompanied a 25-year-old rape survivor three years ago to make a police report.

However, the victim emerged from the police station crying as a police officer "had allegedly made comments about her dressing and the fact that she had been drinking," Raeesah added.

When pressed for details, Raeesah was not forthcoming with evidence to substantiate her claims. Her backpedalling led to netizens criticising her: 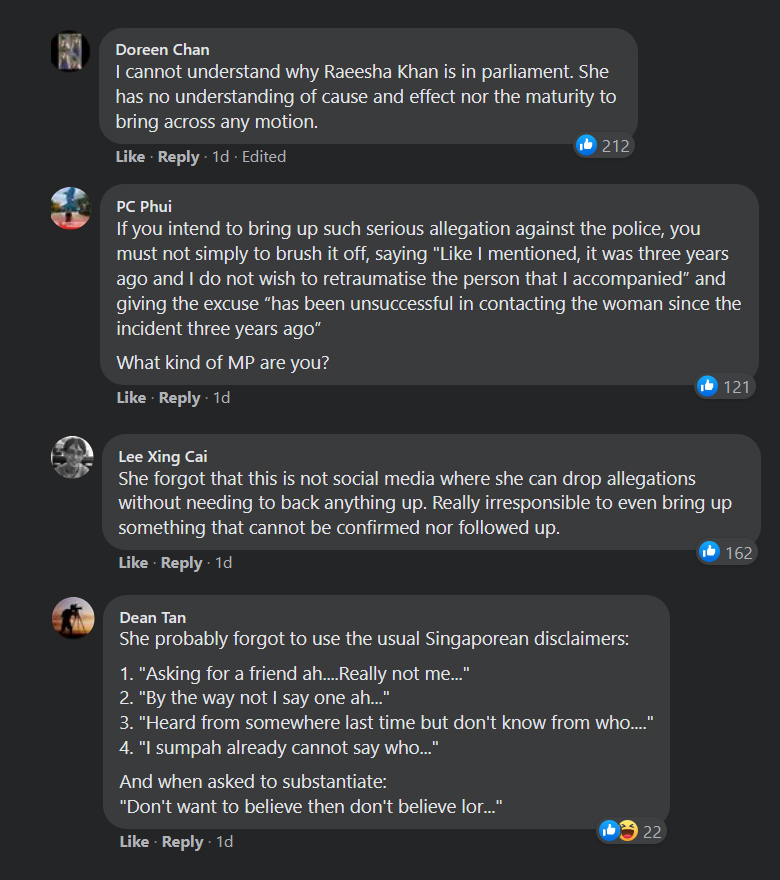 Minister: "Allegations are serious and needs to be investigated"

Responding to Raeesah, Minister of State for Home Affairs Desmond Tan said that the allegations are serious and needs to be investigated.

He said: "We take any form of questions raised about how the police have handled or mishandled this case very seriously, and it should be investigated."

When pressed for more details by the Minister so that the ministry can look into the case, Raeesah backtracked and said she did not want to bring the issue again for fear of "retraumatising" the victim.

"Like I mentioned, it was three years ago and I do not wish to retraumatise the person that I accompanied. But I have to say that these anecdotes are not isolated," she added.

Making a clarification later, she said the intention of her speech was not to cast aspersions on the police. "The police is part of the solution, not the problem."

Raeesah added that she has been unsuccessful in contacting the woman since the incident three years ago. She also said she would communicate directly with the Home Affairs Ministry given a similar situation in the future, even as she works to preserve her relationship of confidentiality with the victim.

"I believe that given the topic at hand, consent is imperative, not least to avoid revictimisation," she said.

Leader of the House: "When allegations are made, members must be prepared to substantiate them"

Leader of the House Indranee Rajah then rose to remind all MPs to exercise their parliamentary privilege responsibly.

She said: "I just wanted to remind members of the House that when assertions and allegations are made, members must be prepared to substantiate them."

She added that this is especially important when an assertion is made against an agency that is not in a position to defend itself.

Raeesah's case bears striking similarity to another incident in 2014

Exactly seven years ago on August 4, 2014 during a parliamentary debate on the Family Justice Bill, WP MP Faisal Manap had allegedthat when he was a counsellor, he came across a couple who were having housing issues and advised to file for a divorce by the Housing and Development Board — so that the wife would be eligible to buy a house under the Singles Scheme and she could subsequently remarry her husband.

When pressed for further details, Faisal admitted that he no longer has the contact of the couple in question.