A netizen behind the Instagram account "@beingbravelywoman" has claimed in her Instastories published yesterday (May 28) that she has the names, dates and details of those involved in the controversial poll sexualising female religious teachers in Singapore.

The lady behind the account is one Noor Mastura, a self-described "serial social activist".

According to a series of posts on Instastories, Ms Mastura claims the perpetrators behind the online poll are "undergrads of prestigious Islamic universities and local Madrasahs". 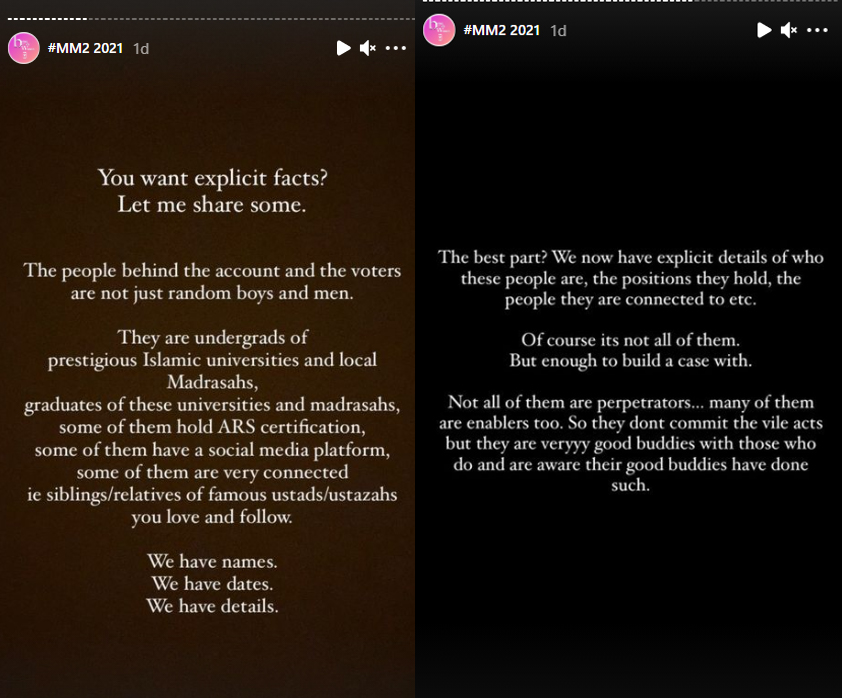 The data was supposedly part of several months of investigative work done by Ms Mastura and her friends for an unrelated case involving victims of sexual abuse and harassment under the #MuslimMeToo movement.

Ms Mastura did not reveal who the perpetrators are.

According to her rationale, Ms Mastura wants to have a systemic change to get to the root of the problem instead of triggering a media storm that may result in "temporary change". 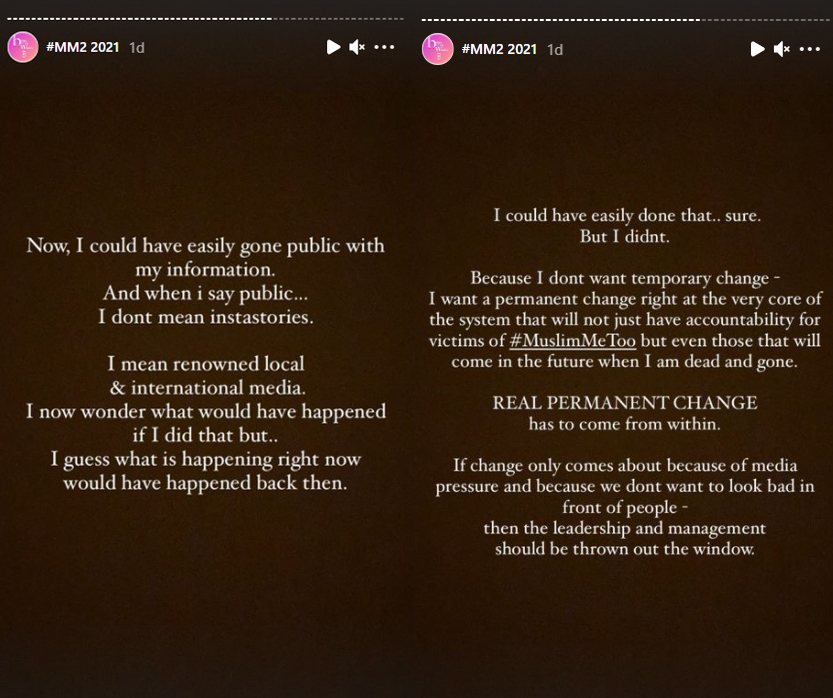 Ms Mastura also revealed that she has held closed-door discussion with the Mufti and MUIS's CEO to discuss ways to nip the problem of misogyny in the bud.

It is not known if Ms Mastura has shared her information with the police.

The issue came to light after Ustaz Muhammad Zahid Mohd Zin, a popular local religious teacher, said on his Instagram account on Wednesday (May 26) that he was shocked when he received a “distress call” from a female religious teacher about the poll published on MeWe - a Facebook alternative.

Accompanying the post was a picture of the poll ranking at least 12 women, with their names and faces censored.

“Who did this must be held accountable,” Ustaz Zahid wrote.

The incident also drew condemnation from the Singapore Islamic Scholars and Religious Teachers Association (PERGAS), which said that all “sexual harassment, abuse and objectification” was haram, or religiously forbidden.

The Infocomm Media Development Authority (IMDA) said it has contacted MeWe to request that it removes the "offending poll if it still remains on the platform".

It has also contacted other social media platforms to ensure the post does not surface there.

President Halimah Yacob and Minister-in-charge of Muslim Affairs Masagos Zulkifli are among leaders who called on the authorities to investigate the poll.

In response to CNA's queries, the Singapore Police Force said on Thursday that they have received a report about the poll and investigations are ongoing.

You can view Ms Mastura's full Instastories on the matter here.