"Sad that PSP not a good faith actor," he added.

Mr Jeyaretnam - leader of the Reform Party - took issue with PSP's statement refuting allegations by RP that it did not honour an agreement over who would contest certain constituencies in the upcoming General Election (GE). PSP had said on Friday (Jun 26) that there was no such agreement.

On Wednesday (Jun 24), PSP announced that they would be contesting in nine constituencies, including Yio Chu Kang Single Member Constituency (SMC).

PSP's announcement prompted RP chairman Andy Zhu to publish a Facebook post on Thursday (June 25) claiming that RP ceded West Coast Group Representation Constituency (GRC) to Dr Tan Cheng Bock’s PSP in the spirit of opposition unity and that in return, the PSP offered to withdraw from various constituencies that they had been eyeing, two of which were Yio Chu Kang SMC and Nee Soon GRC. PSP’s assistant secretary-general Leong Mun Wai responded in a media statement the following day (Jun 26) that although the two parties had exchanged “a lot of ideas and principles”, they did not arrive at a formal agreement.

In a series of tweets posted on Sunday (Jun 28), Mr Jeyaretnam admitted that there was no formal agreement, but rather, a non-formal agreement based on a Whatsapp chat involving Singapore Democratic Party's (SDP) Mr Tan Jee Say and Mr Mun Wai. 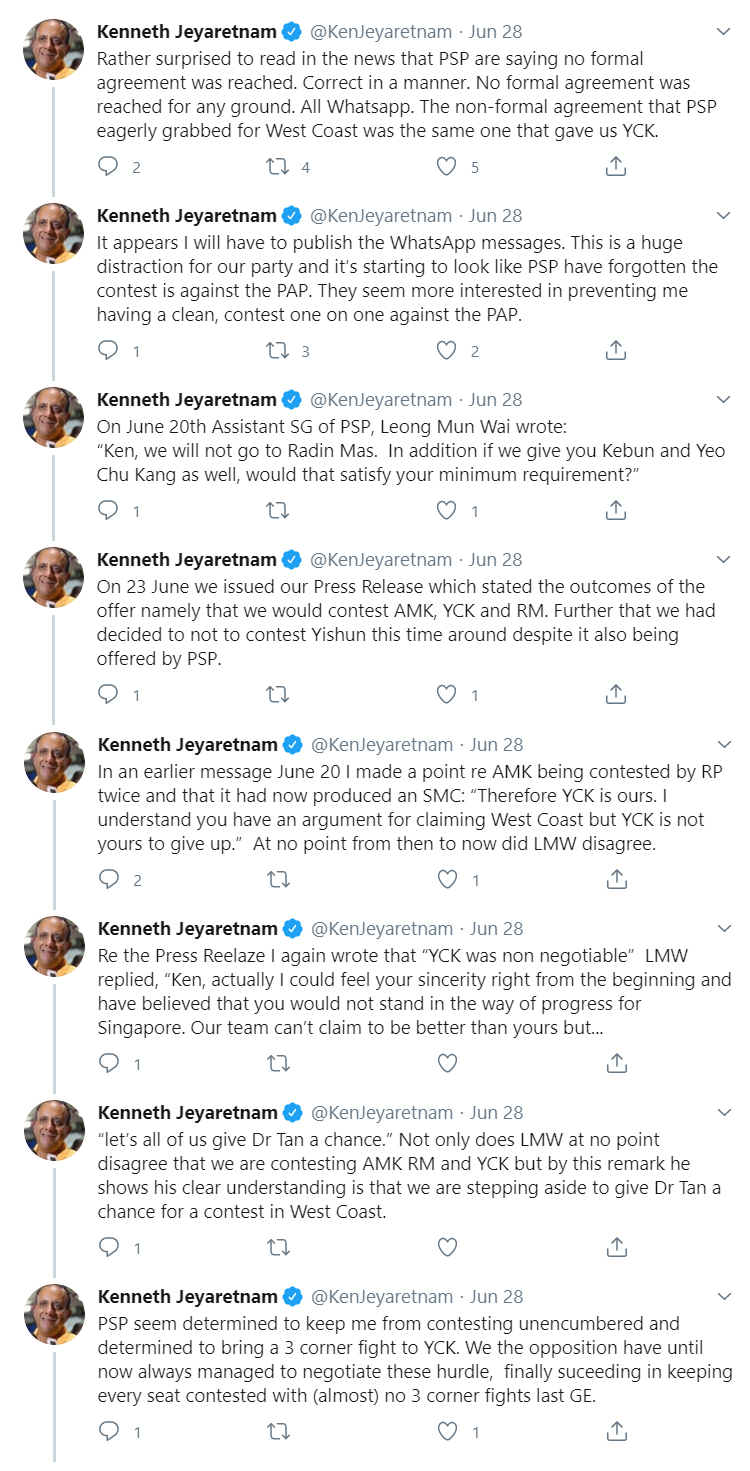 "There is no horse-trading agreement or negotiation between RP and ourselves with regards to Nee Soon or any other constituencies."

The contradiction was picked up by Minister of Law and Home Affairs K. Shanmugam who said that PSP is "half-hearted" about contesting Nee Soon GRC.

"I don't want to speculate why PSP has come, but it seems to have been very half-hearted about it. As you will recall, a week ago it was offering to trade Nee Soon for some other constituency," he said.

In response to the minister's comments, Mr Brad Bowyer of PSP said it was a rumour that PSP had offered to cede Nee Soon although this has since been contradicted by Mr Jeyaretnam's revelation.

Mr Shanmugam then asked if it was indeed only a rumour that PSP had offered Nee Soon to RP, as Mr Jeyaretnam had claimed. “I hope Mr Bowyer will give a straight answer. He will agree that honesty is important. You shouldn’t play with words with voters.”