Two former Workers' Party (WP) politicians have penned their thoughts regarding the saga surrounding the issue of dishonesty on the part of the party's leadership.

Their comments came on the back of the Committee of Privileges report that recommended Leader of the Opposition Pritam Singh to be referred to the Public Prosecutor for futher investigations, "with a view to considering if criminal proceedings ought to be instituted".

Former WP MP Lee Li Lian, who was MP for Punggol East SMC from 2013 to 2015 said that she fears not having any alternative voices in Parliament. 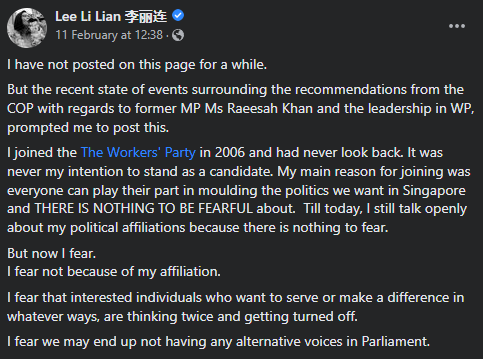 Another WP politician Yee Jenn Jong lamented that some people who are keen on serving Singapore will be "turned off by the PAP's tactics":

"They will weigh the cost to be on the other side. Then, they decide to stay out. We end up with less than the best, a lose-lose situation."

He added that although he is a "retired" politician, he still feels that Singapore should have "capable and responsible alternatives to the PAP". 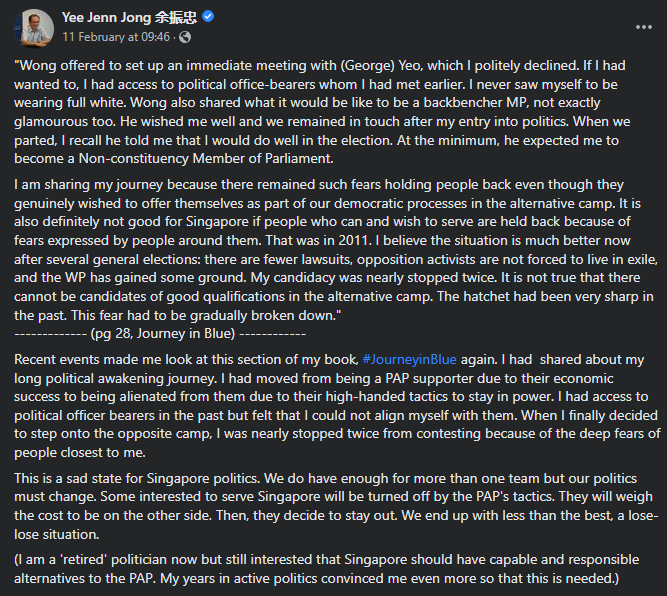 Some netizens took issue with the postings, particularly Lee's: 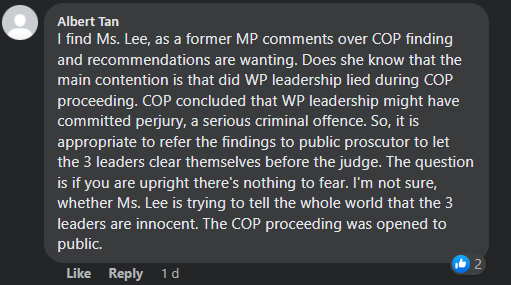 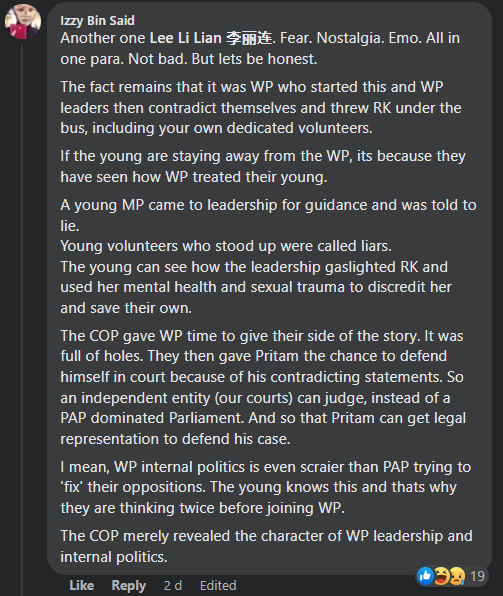 WP shared a statement on Feb. 11, saying that it notes the developments "with grave concern".

"The last time criminal charges were brought against an elected Opposition MP relating to their political work was in the 1980s," the statement said.

Tan said the COP findings are based on "objective evidence" and are made available for the public to see.

"Attempts to politicise the matter before it has been debated are regrettable," Tan said.

He added that based on the findings, the conduct of Singh and Faisal before the COP amounts to potential criminal offences and Parliament has the power to proceed to impose sanctions on Singh and Faisal.

However, the COP recommended Parliament to consider referring the matter to the public prosecutor instead so that the prosecutor can consider all the evidence afresh and any other evidence that the Committee may not have considered.

This gives Singh and Faisal "the full opportunity" to defend themselves in court if the public prosecutor considers and decides to bring charges against the two of them, Tan said.

Tan's statement said: "This process will give Mr Singh and Mr Faisal the best chance to vindicate themselves, if they are indeed innocent."

"It will be a perversion of democracy, for an MP to lie, on oath, and then say that such lies should not be dealt with, or that he is above the law because of who he is."