In response to a Facebook netizen's question on whether he made the "lousy school" comment in Parliament, Finance Minister Lawrence Wong said no.

The netizen Dex Wong asked the minister in the comments section, “Actually I think people are more interested to know whether you were the one who made the "lousy school" comment in Parliament.”

Wong replied, “Thanks for the question. I assure you that I did not make any of those comments.”

In a video of the parliamentary debate last week (Sep 14), which was livestreamed on the YouTube channel of the Ministry of Communications and Information, Minister for Foreign Affairs Dr Vivian Balakrishnan can be heard saying "he's illiterate", after Manpower Minister Tan See Leng replied to a question from Progress Singapore Party's Leong Mun Wai.

Dr Balakrishnan is heard a few minutes later saying "seriously, how did he get into RI? Must have been a lousy school". His comments were directed to Leong.

Some netizens attributed the "lousy school" comment to Wong instead, who sat beside Dr Balakrishnan. 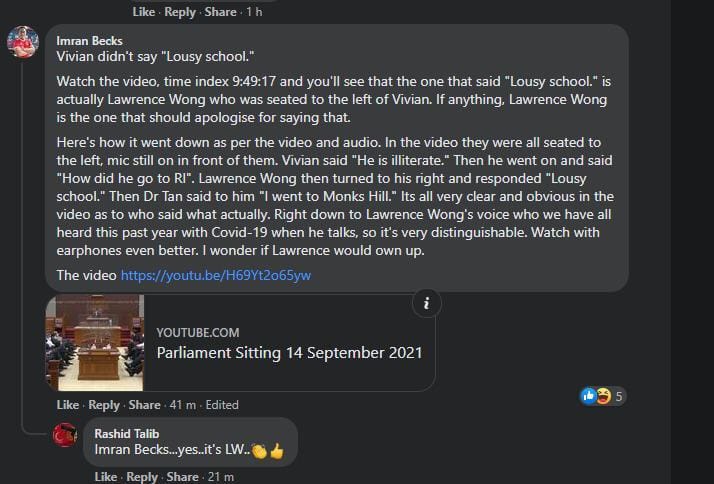 Clipped video proved Lawrence Wong did not make the comment

Fathership took the liberty to enhance the audio of the video clip to ascertain the who's who of who cares.

According to our voice analysis, the comments during the parliamentary debate against PSP's Leong Mun Wai indeed came from Dr Balakrishnan.

You can view the video here.