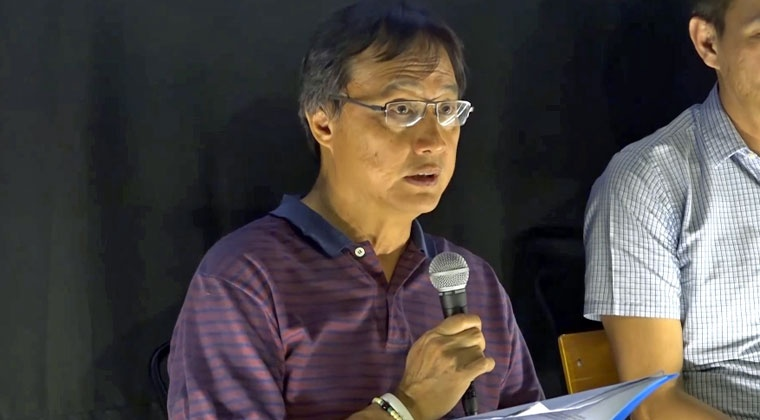 “A rather disingenuous and misleading analysis of the supposed $270mn loss made by HDB and by inference the government in developing BTO flats in AMK imho.” writes former GIC chief economist Yeoh Lam Keong on Facebook on Tuesday (Oct 4). 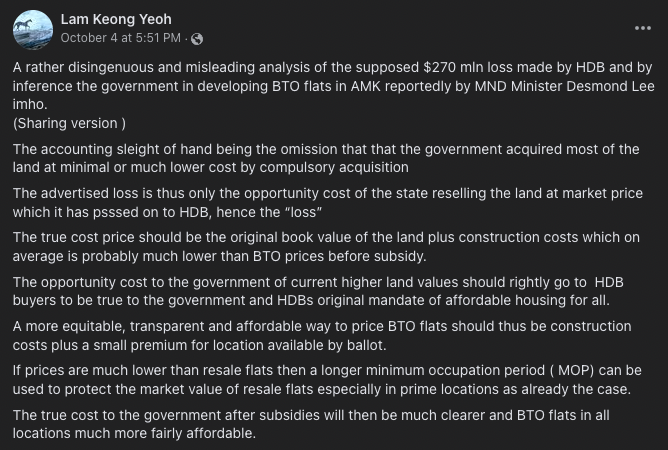 Yeoh: Government buys land for cheap anyways so why is HDB losing money?

Yeoh said: "The accounting sleight of hand being the omission that the government acquired most of the land at minimal or much lower cost by compulsory acquisition."

Yeoh posits that the HDB and by extension, the government, did not actually lose money as land was acquired by the government for pennies on the dollar in the first place and that any loss by the government is considered an opportunity cost, and not necessarily an explicit cost on the books.

This is where Yeoh got his calcualtions wrong.

While HDB is a government entity, financial transactions governing inter-government ministries are not as straightforward.

HDB, like any other developer, buys land at market price - determined independently by the Chief Valuer based on marketing conditions and established valuation principles.

Yeoh's post came on the back of National Development Minister Desmond Lee's speech in Parliament on the same day where the minister clarified HDB's position in response to Progress Singapore Party Non-Constituency MP Leong Mun Wai, who asked HDB's net loss, the cost of land, and the net profit and loss position for the Government.

Leong wanted to know the figures in relation to the Central Weave @ AMK BTO project.

According to Desmond, HDB is set to incur a loss of $270 million from the project.

The land for the AMK BTO project is about $500 million.

Yeoh: Housing cost prices should be calculated based on the original historical cost of the land plus construction costs

Yeoh suggested that HDB should take into account the original historical cost of the land when determining its actual cost price.

He believes that by doing so, the average cost of a BTO would be cheaper and more affordable.

HDB, however, priced the value of BTOs based on prevailing market conditions, including establishing their market value in comparison to resale flats in the same area of the BTO.

By pricing BTO based on the original historical cost of the land, the Government then loses the opportunity to gain proceeds for future investments.

Proceeds from land sales are reinvested as part of Singapore's reserves and grown for future generations.

HDB does not price new flats for either profit or cost recovery. It's key consideration is to ensure affordability for flat buyers.

To make flats affordable for first-time home owners, HDB applies a significant subsidy to the assessed market values when deriving the selling prices.

Notwithstanding the fact that HDB is a Government ministry, it is in actuality a loss-making entity.

HDB recorded a deficit of S$3.85 billion for its Homeownership Programme for the financial year 2021/2022, while the average deficit incurred in the last three years was about S$2.68 billion a year.