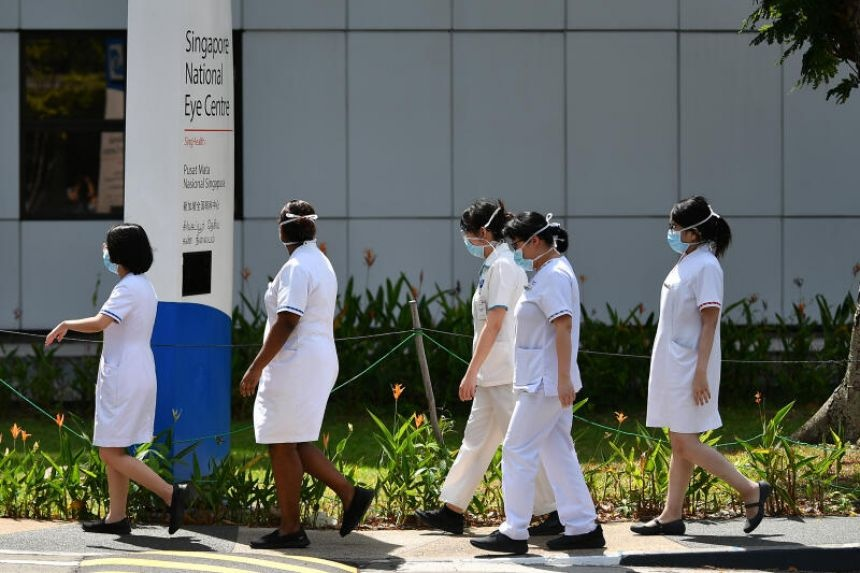 SINGAPORE - Singapore's approach to dealing with sensitive issues like the wearing of the tudung, or headscarf, in certain professions is to discuss them behind closed doors as open discussion may lead to serious ramifications and have an impact on religious harmony.

Minister-in-charge of Muslim Affairs Masagos Zulkilfi and Minister in the Prime Minister's Office Maliki Osman made this point as they responded to a suggestion by Workers' Party MP Faisal Manap (Aljunied GRC) to allow Muslim nurses to don the tudung as part of their uniform.

Both ministers told Parliament on Monday (March 8) that they empathised with the views of nurses who wished to do so, and have been engaging them, union leaders, religious teachers and other members of the community on this issue. There is a consensus that this issue is best discussed on closed platforms, the ministers said.

"They agree that these are sensitive issues and best discussed behind closed doors. They also agree that the solution is not straight forward and we should not rush into one without addressing these other concerns," said Dr Maliki during the debate on the Ministry of Culture, Community and Youth's budget.

Mr Masagos explained that the Government's secular stand on this issue has been consistent, and that the uniform policy in the public service cannot be tilted towards any particular religious belief.

The uniform is a visible sign that service is rendered equally, regardless of race or religion, and allowing the headscarves to be worn would introduce "a very visible religious marker" identifying the female nurse or uniformed officer to be Muslim.

"This has significant implications - we do not want patients to prefer or not prefer to be served by a Muslim nurse, nor do we want people to think that public security is being enforced by a Muslim or non-Muslim police officer. This is what makes the decision difficult, and sensitive," he said.

"Public, aggressive pressure on such an issue can only make compromise harder. Any government concession to religious pressure will cause other groups to take note and adopt similarly aggressive postures," added Mr Masagos.

"Race and religion will become increasingly polarising and this will harm all of us, especially the minority communities."

Mr Masagos also noted that as a community, Singapore Muslims have been adept at making adaptations and adjustments in practising their religion over the years, citing how the volume of the call to prayer at mosques is lowered out of consideration to their neighbours.

"At the heart of our approach is our desire to protect the precious harmony that we have built over the years with other communities in Singapore," he said, calling on the community to preserve this.

In his speech during the Budget debate on Feb 24, Mr Faisal had called for the Government to allow the wearing of tudung as part of nurses' uniform. He said some Muslim women had to forgo their desire to serve as nurses as they would not be able to wear headscarves at work.

Allowing the tudung to be worn as part of a nurse's uniform could allow more women to fulfil their wish to work as a nurse, said Mr Faisal. He added that this would also increase the pool of local nurses, and make nursing here more inclusive.

Adjustments to a plural society

In his response, Dr Maliki said Islamic scholars have given guidance that Muslims must make appropriate adjustments while staying true to their faith when living in a plural and contemporary society.

He noted that Dr Ahmed Al-Tayyeb, the grand imam of Al-Azhar University, considered to be the top Islamic school globally, had advised Muslim women to not leave their jobs solely because they could not wear the tudung due to workplace requirements.

"We must avoid situations like in other countries where issues of religious expression take centre stage and become a divisive matter and put certain groups under the spotlight," said Dr Maliki.

Responding to a point Mr Faisal made previously on how he was repeatedly bringing up the tudung issue as part of his job as an MP to give feedback to the Government, Dr Maliki said that an MP's role has to be more than just giving feedback and reflecting public sentiment.

"PAP Muslim MPs also recognise our role as leaders of all communities. As leaders, we must exercise discretion and know the implications of our actions," said the minister.

"We are leaders and we have the responsibility to ensure our collective desired outcome as a society and country - to maintain racial and religious harmony. This cannot be compromised."

Mr Faisal then pointed out that other countries have allowed the tudung in uniformed jobs.

In response, Mr Masagos said that Singapore has to focus on what would be best for its situation. "There are many things that other countries do that we don't do. We are Singaporeans, we do what is good by Singapore," he said.