An inside look into the life of Lee Suet Fern, wife of Lee Hsien Yang 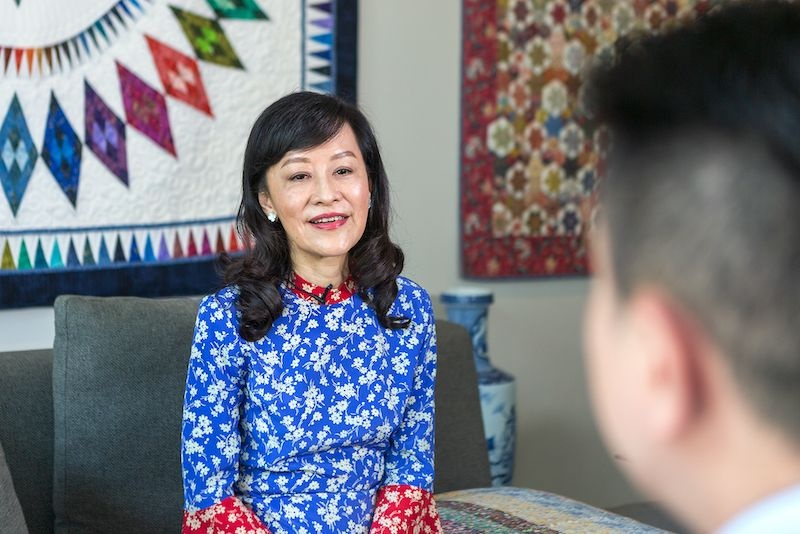 Over tea at the St Regis hotel recently, Lee Suet Fern, 62, was animated as she recalled the birth of her eldest son Shengwu in 1985, and the reaction of her in-laws Lee Kuan Yew, Singapore’s first Prime Minister, and his wife Kwa Geok Choo.

“They're very traditional. They wanted a male grandson, and this was the male grandson they were waiting for. My mother-in-law clucked with pleasure,” said the mother of three with a laugh. She is married to the late couple’s youngest child Hsien Yang, 63.

“Shengwu's birth was the biggest event for them on a personal level. Mama was thrilled, Papa was thrilled, they were deliciously, deliriously happy. It meant a lot to them. It felt to them like a first, although my brother-in-law did have a son with his first wife.”

It was a rare moment for Suet Fern, a prominent corporate lawyer: speaking on the record about her personal life. A self-confessed shy and reserved person, she told Yahoo News Singapore that she has steered clear of discussing her family in interviews over the years.

Notwithstanding her desire for privacy, she has found herself under the media glare in recent months, and over family matters too. Censured by a Disciplinary Tribunal (DT) for grossly improper professional conduct in her handling of the late Lee’s final will, Suet Fern is currently awaiting the result of an appeal to the Court of Three Judges, the highest disciplinary body that deals with lawyers' misconduct, against the verdict.

A lifelong connection to the Lees

The eldest child of prominent economist Professor Lim Chong Yah and schoolteacher See Nah Nah, Suet Fern was born in Singapore but spent much of her childhood in Oxford and Petaling Jaya. Her connection to the Lees started from a young age – her father gave tuition to first Hsien Loong, then Hsien Yang, for their A-levels.

She and her future husband attended elite schools – Raffles Girls School and Catholic High School respectively – before they became contemporaries at National Junior College, where she was a debater and he an athlete and national swimmer.

As the youngest member of the family, and one who married the youngest Lee child, she was lowest in the pecking order. And she did not count on how “fierce, old-fashioned and imperious” her newly acquired mother-in-law would be.

The couple initially lived in Cairnhill Mansions, above Hsien Loong and his first wife Wong Ming Yang. But because Hsien Yang was often away for military training, “I did feel a little isolated and unprotected. I confided that in Yang, that when I first got married, she (her mother-in-law) was quite frightening. Yang just gave me every assurance that it was him that I married and not his mother, and that he would always put me first.”

According to Suet Fern, Wong’s death in October 1982, attributed to a heart attack, was a turning point in her relationship with her mother-in-law. “Thereafter, she was much more reserved and reticent and more careful.”

Nonetheless, the late Mrs Lee was never short of advice on how to raise her children in later years. “I was often ticked off by her (but) not in a terrible way. And when I had my first two sons, this was her typical refrain, ‘You know Fern, you must raise your children like the queen. Leave others to raise your children, and inspect them every day at tea time.’”

Mrs Lee also disapproved of breastfeeding, to the extent that Suet Fern would hide the fact that she was nursing her babies. “She would say, ‘Yang's fully bottle fed and he turned out all right, leave them to maids and a bottle.’”

Defining herself outside of the family

Suet Fern was called to the Bar in 1982. In his 2017 memoirs “Life Journey of a Singaporean Professor”, her father wrote, “The chief examiner, a high court judge, confided in me that she was by far the best student of the class.”

She has since won multiple accolades and awards. In 2000, she founded Stamford Law Corporation, which went on to become the sixth largest law firm in Singapore. In 2015, it merged with Morgan, Lewis & Bockius LLP, one of the world’s top five law firms. Morgan Lewis operates in Singapore through Morgan Lewis Stamford LLC, where she is a director. Suet Fern is also a partner at Morgan Lewis.

“I felt that I needed to be my own person. And I eventually decided I would step out, and I wouldn't work for the government in any way, or at any government agency, or even at Lee & Lee,” she said, adding that for years, she did not even keep a family photo in her office. “I would be a very dutiful daughter-in-law, because I loved my husband. And because I love him, it's the right thing to do to be good to his family. Beyond that, I didn't particularly want, desire, any outside connection.”

Friends and former colleagues attest to her commitment to her work. New York-based corporate lawyer Shawn Desker, 46, worked under Suet Fern for two years at the start of his career, and remembers her as a boss who led by example and never raised her voice. “She is very often the smartest person in the room, but she really thinks she is not a big deal. She went out of her way to make people feel comfortable.”

Members of the legal fratenity that Fathership spoke to under condition of anonymity, however, painted a different picture of Suet Fern: "It is a well-known fact that Suet Fern often likes to name-drop her association as a member of the Lees to get ahead. Her career history hasn't been all sterling as she made it out to be."

When pressed by Fathership for further details, our source reserved comments.

Before Hsien Yang and Wei Ling went public with their dispute with their older brother in 2017, Suet Fern was well aware of the tensions that had been building within the broader Lee family. “I didn't wake up like everybody else and was absolutely surprised.”

Her son, Shengwu, a 35-year-old Harvard academic, was recently fined $15,000 for scandalising contempt of court, over the contents of a private Facebook post from 2017. Insisting that he did not admit guilt, Li said he decided to pay the fine in order to “buy some peace and quiet”.

Nonetheless, she said her family has emerged “better and stronger” from the Lee saga and she expressed pride in how her sons have responded to it with maturity and thoughtfulness.

The Law Society in August this year set out its arguments on why senior lawyer Lee Suet Fern should be disbarred over her handling of founding prime minister Lee Kuan Yew's will, saying she had been involved in its preparation and execution despite knowing her husband stood to gain from it.

Judgement has been reserved in the case. If Suet Fern were to lose the appeal, she may face a fine, suspension or even be disbarred.