A sizeable army of 38 Singaporean writers have issued a joint statement on the BooksActually saga.

The authors - all of whom have published works by Math Paper Press, BooksActually's publishing arm - released a statement on Monday (Sep 27) saying they were "angry and disheartened" to read past employees' accounts and did not condone non-consensual or exploitative behaviour.

"We also acknowledge that our writing community should do better, and that scarce resources should never be an excuse for unacceptable behaviour," they added.

One author Catherine R. Chung whose works were published by Math Paper Press "deeply disagree" with the joint letter.

She felt that an author "should not be answerable or feel that they should make public statements about their publisher's morality" the same way that "people who publish on Amazon Kindle don't make statements about Jeff Bezos's morality." 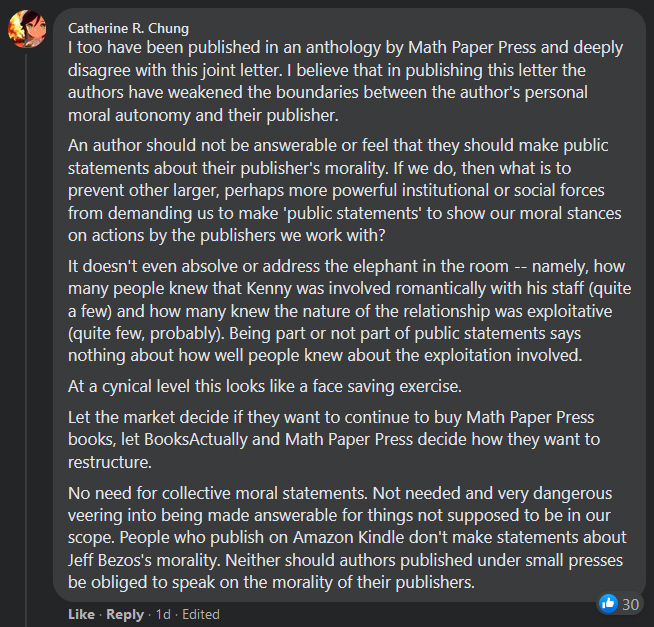 Catherine alleged that many people - presumably in the Singapore literary community - "(a few writers) knew that Kenny was involved romantically with his staff..."

Artist Cheryl Charli Tan, 23, who worked in marketing at BooksActually from August 2017 to January 2019 in a Facebook post said she was hurt to read online comments from writers that they had heard rumours about the allegations or found them unsurprising.

“You knew, and some of you knew to a greater degree than others, but no one did anything about it because you could benefit from this system."